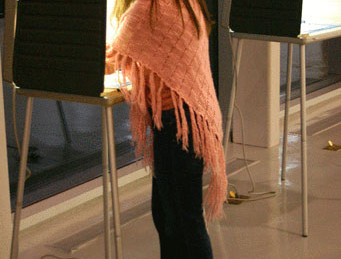 RFID enabling California county to get the vote in quicker Alameda County in California has 800-voting locations and each of these must receive five critical pieces of equipment. That’s 4,000 pieces of equipment that county officials have to make sure to get to the polling places and that must be returned after votes are cast.

The county had used a bar coding system with a supply chain management system to track voting supplies, but the bags still had to be manually opened and searched so the individual items could be scanned, says Tim Dupuis, chief technology officer for Alameda County. “It was very labor intensive and took forever,” he says. “It would take us all night and into the morning to account for all the equipment.”

To try and expedite the problem the county has chosen RFID technology, Dupuis says. The system uses passive tags from RFID Global Solutions Inc. and handheld scanners from Motorola Inc.

Some precincts in Alameda County first piloted the system in November 2007, Dupuis says. It worked so well that it was rolled out countywide for the California State primary in February and will be used with the general election Nov. 4.

It all starts at the county’s warehouse where the voting supplies are stored, says Dupuis. All the equipment receives an RFID tag and is placed in a cart. A county employee scans the cart, which records what equipment is in the cart and where it’s going. The equipment includes a roster of registered voters and memory cards.

Alameda County uses a mix of paper ballots and electronic machines, Dupuis says. There are some touchscreen systems available, but the majority still use paper ballots. After the ballots are filled out they are scanned in and the vote recorded. Memory cards on both the touchscreen system and the paper scanners receive RFID tags and are the first pieces of equipment returned.

After the polls close personnel at the polling places remove the memory sticks and other equipment and place it all in a red bag, Dupuis says. The personnel return this equipment to one of 27 centers around Alameda County.

At those centers’ workers have RFID scanners that check the bags to make sure all the critical equipment is in the bag. “In the past that would have required unsealing the bags and looking for the equipment,” Dupuis says. “It was quite strenuous.”

Within seconds personnel know whether all the equipment is accounted for and can either accept it or send the individual back to the polling place if something was forgotten, Dupuis says. “We can correct the issue within a few minutes and we’re not sitting around discovering that something is missing from the red bag,” he says.

Once enough bags have been collected at the return centers, a driver will collect some and take it to the vote count center in downtown Oakland, Dupuis says. As officials walk the bags into the center RFID scanners set up on stanchions register the arrival and double check to make sure the equipment is present.

While Alameda officials used to be up until the early hours of the morning the next day, the RFID system so far has cut hours off the time it takes to count the votes, Dupuis says.

Terry Alderson, vice president of aerospace and government at RFID Global Solutions, says the application with voting equipment is a first for him. But it’s not much different from other asset management systems the company has deployed.

Motorola has seen similar application with bar coding in the past, says Kevin DeSpain, director of sales for mobile computing and applications at Motorola. “This is a perfect opportunity to replace bar coding with RFID,” he says.