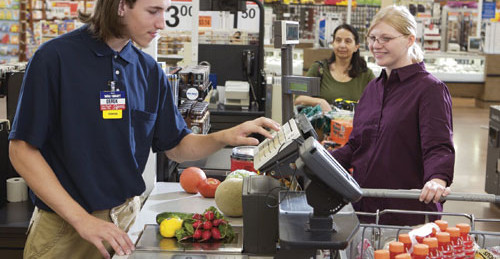 Walmart bringing EMV to the U.S.A.?

Last year there were 944 million EMV cards in circulation worldwide, according to EMVCo, virtually none of which were issued in the world’s largest payments market: the United States.

With the rest of the world now upgraded to a higher security standard, the U.S. has a critical decision to make on when, how and if it wants to make the migration to EMV.

Enter Walmart. Already offering EMV payment in its European Asda stores, the retail giant is planning a big push for the technology in its American outlets and wants the rest of the U.S. retail market to follow. “We’re interested in helping to migrate EMV to the U.S. market,” says Jamie Henry, director of payment services with Walmart treasury organizations. “We view it as a much more secure transaction, and we want to provide our customers with the most secure transactions in the market place.”

Henry is referring to EMV’s two forms of authentication: the chip and the PIN. The chip verifies the authenticity of the card–that it isn’t counterfeited–and the PIN verifies the identity of the user–ensuring that the card isn’t lost or stolen.

How then does Walmart intend to bring EMV to the U.S.? “First of all, we’re having discussions with the media to help make our position known and to leverage other stakeholders in the payment environment that would have similar interests,” says Henry.

Walmart’s technology teams are also in the process of updating the retailer’s existing payment terminals with EMV-compliant software, enabling the cards to be accepted in stores. This project should begin in earnest in the coming year, Henry says.

One of the major issues surrounding EMV’s migration to the U.S. is whether or not to incorporate contactless technology. Walmart has made it clear which side of the fence it stands on–at least for the time being. “We’re not fans at this point of contactless payments via the card mechanism,” says Henry. “Our opinion is it doesn’t offer any higher form of security than the magnetic stripe on the back of the card because it’s simply just communicating that same information. It’s actually probably a lower form of security because there’s no PIN required in contactless.”

Walmart also sees the purportedly superior speed of contactless payment to in fact be negligible: “It’s not that big a deal to tap it against the device versus swiping it through a device,” says Henry. “You still need to go into your wallet; you still need to pull the card out, and then it’s just a matter of either tapping and holding it for a second or so against the reader or swiping it through the machine.”

On the other hand, Patrick Gauthier, senior vice president at Commerce Fault Line, believes that contactless does provide added security over traditional payment methods and is the ideal avenue for chip payment’s migration to the U.S. “We need to leverage contactless deployment in U.S., which has been happening slowly but surely,” adds Gauthier. “Walmart has expressed reluctance to that, but if you fix the transactions rules–interchange fees, authentication requirements–balancing the merchants and issuers benefits, you can make contactless a no-brainer, even for large merchants like Walmart.”

Contactless offers a number of other benefits as well. “First of all, not all consumers are comfortable with swipes–sometimes the stripe is read, sometimes its not and the motion can be difficult for the elderly and disabled. The motion of contactless is extremely intuitive–just a tap,” Gauthier says. “Secondly, if you have contactless, the form factor doesn’t need to be a card; it could be all sorts of things.”

Contactless or not, EMV still has a few obstacles to tackle before becoming a reality in the U.S., Henry says. Unless merchants see lower interchange fees for EMV transactions there is no incentive for them to spend the money to upgrade the terminals and infrastructure. Issuing banks also don’t have an incentive to issue the new, more costly cards.

There’s the issue of money and how long it will take to make the switch to EMV. There are roughly 1 billion payment cards in the U.S. and 6 million merchants, and updating those kinds of numbers will take some time and cost. This is why leveraging the burgeoning contactless movement would be so beneficial to EMV, according to Gauthier.

Still, despite the snags, Gauthier says the U.S. has never been closer. “Probability of a migration to chip in the U.S. is high, the planets are aligning, and payment networks are looking in earnest at migration,” he says.

If merchants, payment processors and banks get on board with a more secure payment solution it might not be traditional EMV as seen in other countries, Gauthier says. “We could have ‘EMV a la 2010’–EMV updated for today’s payments in the U.S., which includes leveraging contactless,” he says.