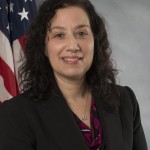 JoAnn Buscaglia began her career in biometrics through forensic science research and development. In the early 2000s, she served as a research chemist in the FBI’s Laboratory Counterterrorism and Forensic Science Research Unit (CFSRU). While there, she assisted with latent fingerprint research to develop quantitative measurements and assess the scientific basis of identification conclusions in order to address court admissibility challenges to the discipline.

In 2002, Buscaglia began working with automated fingerprint identification system (AFIS) algorithms as a tool for quantification of fingerprint features. She also wanted to explore the possibility of using image-based and other non-minutia-based algorithms for latent print searching and matching in AFIS. In 2004-2005, she served on an internal FBI Laboratory panel to assess the research needs of the latent print discipline, particularly related to the scientific basis of conclusions. That panel laid out a portfolio of research Buscaglia has led over the last decade, resulting in several high-profile publications on latent print decision analysis.

When Buscaglia began to work in biometrics she was introduced as a “research chemist” when delivering presentations at conferences. She often found herself explaining why a chemist was doing biometrics. “My career path in biometrics is atypical of many in the field,” she explains. “My formal education – bachelor’s and master’s degrees – are in forensic science (criminalistics, in particular) with an emphasis on trace chemical composition and microscopy of trace evidentiary materials.”

Buscaglia completed her PhD in 1999, with a dissertation also in the area of trace elemental analysis of materials. Prior to joining the FBI Laboratory, she worked for almost a decade in academia and as a consultant for both private- and public-sector forensic, environmental, and industrial hygiene laboratories. “Because of my strong foundation in forensic science — including pattern evidence analysis, research and statistics — I was assigned to assist with latent print research in response to court challenges to the foundations of the discipline.”

She now has more than 18 years with the FBI Laboratory’s CFSRU and nearly 14 years in biometrics research. Much of her biometric research has been supported through collaboration with the FBI Criminal Justice Information Systems Division Biometrics Center of Excellence.

“In addition to biometric research in latent prints, I have led research for more than 10 years in the use of handwriting as a biometric, and in the development and testing of an automated handwriting identification system — FLASH ID — which is now deployed in the FBI Laboratory Questioned Documents Unit,” she adss.

“Our first manuscript from this study was published in the Proceedings of the National Academy of Sciences and introduced as evidence in trial the day after its electronic publication,” she says. “It is both rare and gratifying to see that kind of immediate impact and transitioning of our research into practice.”

This ongoing portfolio of research, with the follow-on “White Box” study, has resulted in several publications and has been part of nearly every criminal case involving challenges to fingerprint evidence, supporting the continued scientific admissibility of biometric fingerprint evidence in court.

The Black Box and White Box research has been frequently cited by the judiciary system, the Department of Justice Inspector General, and in the scientific literature. Most recently, our work was recognized by the White House Office of Science and Technology-sponsored President’s Council of Advisors on Science and Technology (PCAST) in its September 2016 “Report to the President – Forensic Science in Criminal Courts: Ensuring the Scientific Validity of Feature-Based Comparison Methods.”

The PCAST report cited her publications extensively and concluded that, “…the FBI Laboratory’s studies have significantly advanced the field.” It has been an honor to lead such a highly qualified, dedicated research team and rewarding to see the impact of our work on criminal justice and security.