After nearly three decades in the Army serving as a member of the Military Police around the globe, Amy Turluck was ready to retire. But she wasn’t ready to stop working. So she started looking around and found the job that led to her being honored as a 2021 Women in Biometrics award winner.

“My last position in the Army was just beginning to delve into biometrics, and I could see then that biometrics was going to be very much in the future for the Department of Defense (DoD),” Turluck says. “One of the primary reasons I was interested in this position in the biometrics field was that I would be able to continue to support and serve Soldiers after my retirement from the Army.”

For seven years, Turluck has been Director of the DoD Biometrics Operations Directorate at the Defense Forensics Science Center in Forest Park, GA. She provides direct oversight of the DoD’s primary and authoritative biometric database employed by US and coalition partners to globally identify enemy forces. She’s responsible for 20 government employees and 120 contractors whose duties include systems engineering, logistics, program management, and program protection. 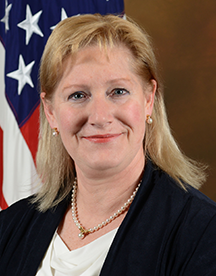 “Law enforcement and bringing people to justice is very important to me,” Turluck says.

Responding to the Army’s directive to stand up a “Protect Directorate,” Turluck initiated and led a working group to achieve nearly 500 benchmarks. After 11 months, she led the organization through a Department of the Army inspection resulting in nine best practices adopted for global implementation.

She also revamped the organization of 17 disparate offices, leading staff in developing a standard operating procedure for all Provost Marshal Offices. The result was development and implementation of methods to enhance information sharing practices, threat vulnerability reduction, and infrastructure resilience practices with other agencies and infrastructure partners.

Her proudest accomplishment:
“Being part of an organization that is full of extremely talented and professional people and knowing the work that my organization does on a day to day basis has an impact on the safety and security of our Department of Defense forces as well as National Security.”

“I don’t think we’ll ever really know the full significance of the contributions of our organization,” Turluck says. “If what we do saves just one life; that is significant.”

Turluck is quick to share the credit for her Women In Biometrics award. “This award is really representative of all the people I work with on a day to day basis. They relentlessly do the hard work, day in and day out at an incredible pace. I share this honor with all of them as they made it possible.”