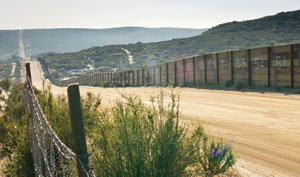 In January 2004 the US-VISIT biometric border crossing system went live. The program was collecting two-fingerprints for comparison against a watch list of known criminals and terrorists to make sure they weren’t allowed into the U.S. It is one of the first biometric border crossing systems in the world and serves as a model to other countries as they roll out similar systems.

The U.S. Department of Homeland Security’s US-VISIT, which came out of the Sept. 11, 2001 terrorist attacks, has changed, upgraded and adapted in the past eight years. Still more changes are on the horizon including: greater interoperability with other U.S. agencies, the addition of multi-modal biometrics for expedited screening, and refinements on the existing exit system.

Since upgrading from two-prints to 10-prints in 2008 a focus has been on interoperability with other agency databases, says Robert Mocny, director of the US-VISIT program. The program is fully interoperable with the U.S. Justice Department’s biometric database, checking fingerprints of individuals at border checkpoints in real time and receiving responses in 13-seconds. “This enables Customs and Border Protection access to millions of records in the criminal master files,” he adds.

The next step is to build the same level of integration with the U.S. Defense Department’s Biometric Identity Management Agency, Mocny says. The DOD has been collecting biometrics overseas, and while US-VISIT is able to check against these records, it’s not in real time. This should change in the fall. The plan is to add back and forth communication so customs officials can check the Defense database and Defense can access US-VISIT data. “Officials will be able to get in from any point, Justice, Defense or Homeland Security to access information,” he says. “This didn’t exist a few years ago.”

Fingerprint biometrics will be the standard for US-VISIT, though the agency will add iris to the mix, Mocny says. In 2010, Homeland Security piloted iris scanning at a border patrol station in McAllen, Texas, checking immigrants against a watch list as they crossed the border.

The success of this pilot is expected to lead to iris biometric integration into Global Entry kiosks. Global Entry is an international expedited border-crossing program that enables U.S. citizens to use kiosks when entering the country. Travelers have to enroll in the program, pay a fee and undergo a background check to participate.

Once enrolled, travelers scan their passports and fingerprint, enter their declaration and can go on their way. The kiosks will soon add iris biometrics as an option for authentication in addition to fingerprint, Mocny says. “People will have a choice of fingerprint or iris,” he says. “For people with fingerprints that don’t match well, iris will be an option.”

“We’ll always keep fingerprint but from a transactional point of view iris is much better,” Mocny says. There’s the possibility facial recognition could be added down the line as well.

US-VISIT isn’t ruling out adding iris to the traditional border screening process either, Mocny says. “It may be both fingerprint and iris or one or the other,” he explains. “To increase security, we could also alternate between modalities–one day it’s fingerprint, and the next day it’s iris.”

While the biometric screening process has been in place for some time, the exit component to US-VISIT has been tougher to tackle. Homeland Security wanted airlines to collect the biometric departure information, but the companies refused and eventually were able to dissuade the agency.

The biometric portion of exit has not been fulfilled, but the agency has taken other measures to determine if individuals have overstayed and track them down, Mocny says. Airlines still collect biographical data from travelers and provide that to Homeland Security. That information combined with the entry data and other data sets enables the US-VISIT office to determine whether someone is a threat.

“We take the biographical data and run it through additional databases and we can get a good idea of who is left in the country, whether they may be a threat and if they should be looked for,” Mocny explains. “Having the biographical side gets us to a point but when we add biometrics we’ll be in a better place.”

Since the US-VISIT program was one of the first biometric border crossing systems deployed, officials have worked with other countries considering similar systems. China visited the US-VISIT office earlier this year to discuss biometric borders and the European Union is also rolling out a US-VISIT type of system, Mocny explains.

The US-VISIT office is also working with other countries on standards for biometric usability, Mocny says. Basically, travelers to different countries using these systems should have the same experience, know where and how to place their fingers on the scanner and be used to the process. “Have it be like an ATM but for biometrics … everyone knows how to use an ATM no matter what country you’re in,” he explains. “They need to have a common interface so someone who’s not a frequent traveler can figure out how to use it.”

There should also be an accepted set of privacy and security requirements. “As more countries do this we need to make sure we’re adhering to standards, ensuring privacy and security,” Mocny says. “We need to create a body or have an existing one create standards to make sure that everyone knows how biometrics are used and has confidence using them.”

On February 6, 2012, subject “X” arrived at the George Bush Intercontinental Airport in Houston after a trip to Panama and applied for admission as a returning lawful permanent resident.

He presented a valid Mexican passport and a valid U.S. Permanent Resident Card. After his fingerprints captured in the system, he was referred to secondary inspection for being a match against the US-VISIT Watch List. During secondary inspection, it was discovered the subject had been arrested in Texas for drug possession, and was determined to be inadmissible into the United States due to a controlled substance conviction.

This case highlights the value of having the availability to search the FBI’s Criminal Master File which returns a response within 15 seconds.

Without a positive biometric identification match, “X” would have possibly entered the U.S. without question.

On November 30, 2011, Australia submitted to US-VISIT the fingerprints of subject “V,” who was seeking refugee protection.

The fingerprints were a positive match to an encounter in US-VISIT database. After further analysis, it was revealed that subject “V” was born in Egypt yet claiming Australian citizenship. “V” was in possession of a valid passport issued by Australia, but it was suspected that it was issued in error and obtained by using fraudulent claims and documentation.

It was also discovered subject “V” was connected to multiple aliases, social security numbers, and dates of birth. US-VISIT assisted Australia in confirming his true identity.