ABI Research forecasts the global biometrics market will reach more than $30 billion by 2021, marking a 118% increase from 2015. Consumer electronics, particularly smartphones, continue to boost the biometrics market, with embedded fingerprint sensors anticipated to reach two billion shipments by 2021 at a 40% compound annual growth.

North America and the Asia-Pacific region will continue to dominate the majority of the biometrics market share, ABI Research market data suggests that Latin America and the Middle East can also expect a boon in terms of new biometric implementations. This will primarily occur in banking and personal finance, followed by the governmental and security sectors.

Rising tensions and pressing identification issues in both the Middle East and Europe will also cause a major increase in biometric technologies. This will, in turn, motivate the respective governments to push for new legislation and regulations for data management and exchange initiatives.

Payment companies, like Mastercard, lead the way with multimodal technologies and a distinct emphasis on facial recognition. Meanwhile, Gemalto, STMicroelectronics, FPC, and Precise Biometrics recently formed a partnership for the development of end-to-end biometric architecture. And Morpho (Safran) partnered with Airtel to increase user mobility under the UIDAI project in India. 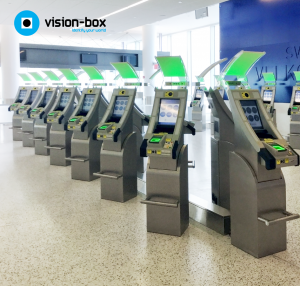 Vision-Box, a company in the area of biometric traveler facilitation, is providing facial recognition technology to U.S. Customs and Border Protection for a deployment at three JFK arrival terminals. This deployment follows the successful testing of the same system at Washington’s Dulles International Airport.

The vb e-pass desktop biometric technology is part of a facial recognition solution provided to UCBP by Unisys Corporation for a deployment at three JFK arrival terminals.

The deployed solution supports a simple process: after authenticating and reading the chip of the traveler’s electronic passport, the vb e-pass desktop takes a biometric quality photo of the passenger’s face, matches the captured facial image against the photo stored in the e-passport, and gives a probability match based on multiple facial features. If the image match probability is low, the passenger may be flagged for additional screening.

Complementing the new process at immigration booths, Vision-Box has already started installing face-matching technology at Automated Passport Control kiosks used by CBP for the inbound immigration processing at a dozen of the largest U.S. international airports, with Orlando International Airport becoming the first to go live in October 2015.

The Boosted NFC security module series manufactured by Mobile Payment Solutions has been awarded the Mobile Finance Secure Element Certificate by the China Financial Authentication body of the People’s Bank of China.

At the core of the module is Infineon’s Boosted NFC Secure Element. It eliminates the need for a separate NFC controller that is typically required to utilize card emulation functionality in a device. With the booster technology, the NFC antenna and antenna matching components are included into the package. This significantly reduces PCB footprint by more than 75% – when using the smallest module of the series to only to 4mm x 4mm. Apart from that, software development efforts for the NFC system integration can be cut down.