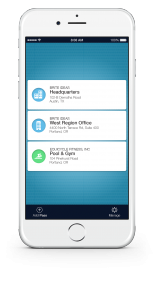 The vast majority of access control systems use cards, or a mobile device’s NFC or Bluetooth interface for access, Mobile Pass uses an app on a smart phone. A user just activated the app and presses a button, a call goes to the cloud to validate access and the door opens, says Steve Van Till, CEO at Brivo. All of this takes about one second.

From a workflow perspective, the Brivo OnAir administrator selects a user and creates a Brivo Mobile Pass invitation that is delivered via email. The user then clicks the “Add” button in the email to activate Brivo Mobile Pass on their phone. The users can now open doors as they would have with a key card. As with key cards, Mobile Passes can be revoked at any time by the administrator.

For users, the Brivo Mobile Pass Application is designed to be more convenient and secure than traditional key cards. It travels with them wherever they carry their phone, and it’s protected by passcode and biometric capabilities built into the smartphone. When the user wants to open the door they open the Brivo Mobile Pass application. It communicates with the cloud using the smartphone’s capabilities and requests that the door be opened. No key card is needed.

Future versions of Mobile Pass will offer additional functionality, Van Till says. For enterprises that want higher security the system will require users to enter a biometric or PIN for access to specific doors. For those enterprises that want to ease friction a future version will use geo-fencing so that a door will automatically open when the user is within a certain distance.

Mobile Pass also operates across multiple, unaffiliated Brivo-equipped facilities such as offices, gyms and parking garages. Users can add Brivo Mobile Passes from an unlimited number of accounts via email.

Available now on both iOS and Android, Mobile Pass app enables enterprises to distribute credentials to their entire population without any on-premise equipment changes. Enterprises that use Brivo’s OnAir system will automatically be given five free Mobile Pass users and additional passed can be ordered through channel partners, Van Till says.