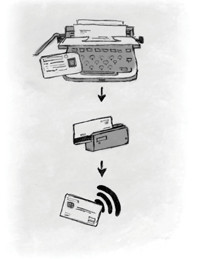 Budget demands phased roll out of contactless at Quinnipiac

The Qcard had relied solely on magnetic stripe technology for 24-years before entering the contactless generation. While the contactless rollout has been successful, like any new campus system it has faced both obstacles and some vocal critics.

The Qcard has been around since 1987 when it started as a pure debit-like card, says John Meriano, section vice president for Administrative Services at the school. Before 1987, there were two documents students carried with them, a paper meal ticket and an ID card that didn’t have a photo and had no connection to the meal plan.

The meal card was a paper ticket, says David Hall, member of the Qcard office team. The paper meal tickets had to be inserted individually into the typewriter and the student’s name and ID number manually typed onto each ticket. The cashier would mark on the ticket the meal plan that the student was taking, says Hall. “A student could purchase any one of three meal plans, A, B, or C, which provided 19, 14, or 10 meals a week,” Hall adds.

“Even during the first few years of the current debit card system, we used swipe cards that were separate from the ID card,” Hall explains. “There were blue cards for the required service and yellow or gold cards for the optional service. It was known as the gold service because of the color of the cards. It continued to be known as the gold service long after the actual gold cards had gone out of use.”

The university later used the student’s non-photo ID card with a validation sticker for meals, Hall says. “At the end of each semester these cards had to be turned in to our office to have new validation stickers put on for the next semester.”

It was no wonder the school turned to a card that could handle more than one function. When the mag stripe Qcard made its appearance in 1987 it was good for just laundry and vending, says Meriano.

The Qcard has had several card system providers including Diebold and AT&T CampusWide. In November 2000, Blackboard purchased CampusWide and Quinnipiac became a Blackboard customer.

In 2000 the campus added an off-campus merchant program and now has 45 merchants accepting the Qcard. The university’s next card upgrade didn’t happen until May 2011 when it decided to go contactless with Blackboard’s Sony FeliCa card. “We went with contactless because that’s the way the industry is moving,” says Meriano. “We had the opportunity to start moving in this direction and we took it.”

A major reason for the change was that many of the institution’s magnetic stripe door readers were nearing end of life, Meriano adds. But there was still the cost issue upgrading all the doors to contactless at the same time, says Meriano.

Upgrading all the doors at once proved cost prohibitive. “We have over 5,000 offline door locks as opposed to the 180 exterior doors,” says Meriano.

So far Quinnipiac has converted about 7% of its readers to contactless, says Sandip Patel, financial systems analyst at the institution.

This migration timeline is one of the issues students have with the system, according to student accounts in the campus newspaper. Students can enter the dorm building using contactless at perimeter doors, but must still swipe the magnetic stripe to enter interior rooms. Meriano sees this not as a complaint but as a positive sign of the technology’s acceptance. “Students want more from the card. They like the tapability,” adds Meriano.

In addition to door access and cafeteria applications, the card is used in laundries, vending, bookstore, copiers, library, time and attendance, parking lots and the recreation center.

Currently, only some laundry and vending machines accept contactless for payment. “We’re upgrading all machines to take contactless but that should take about six months,” says Meriano. Off campus, copying and the bookstore remain mag stripe only environments.

Another student complaint involves the card’s use in cafeteria lines. One line accepts the Qcard, while the other accepts only standard credit cards or cash. “The way our lines are set up with cashiers in the middle, only one FeliCa reader can be plugged in at a time. Blackboard is working on fixing the issue so we can have two readers,” says Patel.

The 45 off-campus merchants accept payments via the card’s mag stripe utilizing a Blackboard-provided reader. Blackboard administers the program and processes the transactions, says Meriano. The university receives a share of the merchant fees.

Meriano says that the off campus portion of the card is extremely popular. “If they lost the card, they can’t eat, can’t print. We used to call it their passport to life … It’s that important,” says Meriano.

An online component of the card enables students to add value or report the card stolen, says Meriano. Students also can deposit cash into value transfer stations located throughout campus.

Meriano admits there are growing pains with the new card, but he’s confident that with Blackboard’s help, glitches such as the cafeteria problem will be solved in short order. As to using the contactless portion of the card to enter a dorm room, he says it’s just a matter of time before all the locks are retrofitted to accept contactless.