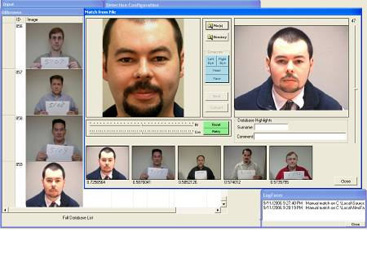 Pierre Martin’s crime of armed robbery with a firearm is anything but revolutionary. His arrest, on the other hand, is a groundbreaking step forward for Chicago law enforcement as he became the first perpetrator in Chicago history to be apprehended a using the department’s facial-recognition software.

Using little more than a Jan. 28 photo of the suspected robber, captured on a CTA surveillance camera, police were able to positively identify Martin, despite the photo being taken from the side, according to a report in the Chicago Sun-Times. The captured image helped law enforcement officials bring Martin to justice after allegedly stealing a cellphone from a man at gunpoint on the city’s Pink Line train.

Police took the photo acquired from the CTA camera and after checking it against an database of criminal booking photos – 4.5 million, in fact – Martin’s previous mug shot was found to be the top match. To further ensure that Chicago PD had their man, witnesses identified Martin in photo lineups and according to police, confessed following his arrest in May.

The software behind the Chicago arrest is NEC’s NeoFace, a solution that is gaining popularity with other police departments nationwide. Chicago makes for a particularly prime location for the facial recognition software, however, as the city boasts some 24,000 surveillance cameras tied directly to the city’s computer network.

Chicago Police officially launched NeoFace in mid-June, outfitting all three detective branches along with the Criminal Information Prevention Center with NeoFace workstations. The department is currently in the process of training its officers in the use of NeoFace.

As with the case of Pierre Martin, NeoFace technology can obtain a match even if the photo is not taken head on, or if a hat or glasses is obstructing part of the subject’s face. Finding a match depends upon the camera, but NeoFace’s software can work with both high and low definition image capture.

Understandably, the NeoFace solution is a source of concern for some members of the public. In particular, the American Civil Liberties Union (ACLU) of Illinois is skeptical of Chicago PD’s use of facial-recognition technology – a notion that is only further justified by recent privacy concerns related to the National Security Agency’s phone surveillance practices.

The Civil Liberties Union expressed its concern as far back as two years ago when it recommended that police only use facial recognition and similar technologies when they have probable cause that the person in the image was involved in a crime.