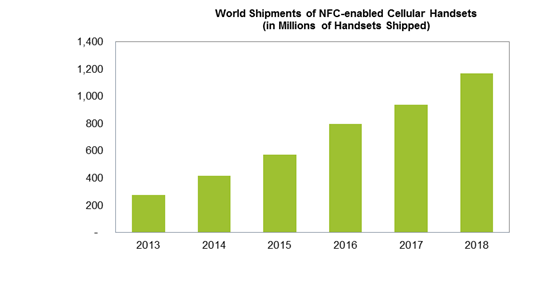 Global shipments of mobile handsets equipped with near field communication technology will increase by 400% from 2013 to 2018, reaching 1.2 billion units, according to HIS Technology.

Last year was the beginning, with worldwide shipments of NFC-enabled cellphones climbing to 275 million units in 2013, up 128% from 120 million in 2012. The market will expand by more than 50% this year to reach 416 million, as presented in the attached figure. From 2013 through the end of 2018, worldwide shipments of NFC-enabled cellphones will rise by 325 percent.

A major challenge for the NFC market in 2014 will be to develop services and applications that consumers want. This will help to promote mass appeal and adoption of the technology. The slow pace at which the mobile payment ecosystem is being rolled out is another key challenge that will need to be addressed this year.

While NFC was initially targeted at mobile phones, the technology is increasingly being used in other devices such as tablets, sports and medical devices, gaming consoles, headsets and other consumer goods.

In 2013, Android-based smartphones dominated the NFC marketplace with 254 million units, or 93%, of all NFC-enabled devices shipped. In 2018, IHS predicts the number of Android NFC-enabled smartphones will reach 844 million, representing 75% of the shipments.

Shipments of NFC in all kinds of devices are expected to rise rapidly during the next five years. By 2018, all NFC modem-device-type shipments will grow to 1.64 billion, up from 321 million in 2013.

The most popular method of incorporating NFC into cellphones now is by embedding a device directly into the handset. This method made up 90%, or 267 million, of all NFC modems that were shipped in handsets in 2013.

NFC phone shipments to boom thanks ...