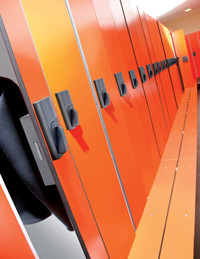 Organizations with deployed contactless IDs and access control systems have a range of opportunities available to further benefit from the investment in technology. Logical access and closed loop payments are often discussed, but another type of security can prove advantageous. Electronic control of lockers, safes, cabinets and other non-traditional openings is a rapidly growing trend made possible by contactless systems.

When the Unified Fire Authority in Salt Lake City needed to securely and easily store and track the narcotics that firefighters and paramedics carry with them to emergency calls, they turned to Salto’s i-Locker and XS4 lock systems for lockers and cabinets.

Now, 22 fire stations have secure drug boxes and safes outfitted with battery-operated locks, accessible through the use of a contactless smart card. Access privileges are controlled from the central computer system in the main office. “We know who enters the safe, when they open and close it, so we have exact documentation of everybody who goes into and out of the safe,” says Mike Bohling, captain of the Unified Fire Authority.

The i-Locker and XS4-Locker are battery-powered locks that can be installed on just about any locker, cabinet or door. They can be used with key fobs, wristbands or smart cards containing DESfire, Mifare, HID iClass and Legic contactless technologies. They can also read smart phones outfitted NFC.

“We’re compatible with just about all of the smart credentials in the world,” says Mike Mahon, senior vice president of sales at Atlanta-based Salto. This makes the product easier to integrate into a clients already-existing security and credential system.

Access privileges are managed from the client’s central computer system using Salto software or software provided by a security partner, such as Honeywell or Sielox. The individual locks are not hard-wired to a network but rather controlled via data and access rights held on the user’s contactless ID card.

Both the lock and user access cards produce an audit trail. “All of the user rights are on the card,” Mahon says. “There is no need to update or change the access on each lock manually with a handheld device, as with other systems.”

Both the i-Locker and the XS4-locker are battery powered, simplifying installation. “You can install them on a pre-prepped door in seven minutes,” Mahon says. “There is no hard-wiring and just two screws, so you can use it on any locker, mortis door, cylindrical door, exit device, deadbolt or on glass doors.”

They’re powered by three AAA batteries that last for about 60,000 openings, which is usually two to three years of standard use, Mahon explains. When the batteries are low, the locker sends a signal to the network alerting the operator that it’s time to change them.

The technology is attractive to a wide range of industries. Compared to key or combination locks, contactless smart locks have audit trail capability. “And you don’t have to worry about lost keys,” Mahon said. “Replacing lost master keys can cost thousands up to hundreds of thousands of dollars, depending on the size of the facility. With these, you never have to rekey the facility, and you can control and restrict zones 24 hours a day.”

Salto locks are used in a range of industries including universities, elementary and high schools, hospitals and nursing homes. Fitness centers can better manage their locker inventory, preventing guests from using more than one and leaving other guests without, Mahon said. “It also produces an audit trail if anything were to go missing.”

Most organizations still can’t live without keys. No matter how far industry and government move toward keyless products, the need to manage keys will remain a fact of life. To bridge the gap, many companies offer keyless locker products to hold–ironically enough–keys.

Traka Plc and HID Global recently installed a keyless system for the city of Honolulu to help manage physical key access for 44,000 employees. “They had an access control system already deployed, with badges and secure credentials and IDs already in use,” says Bill Davis, channel distribution manager for Traka plc.

Employees now use the same badge that opens doors to facilities to open a key cabinet for the motor pool. Employees use their credentials to check out vehicles via a Web-based front end. “The user can log in and reserve a car just like they would at a car rental company, and they can only reserve the types of vehicles they’re authorized to check out,” Davis says.

When the user returns the keys, the system prompts him or her to record mileage, and report any vehicle malfunctions to the fleet managers. Middleware installed on the client’s network controls key access also ensures keys don’t accidentally go home with employees at the end of the day.

“All transactions are recorded to the database or access control system, so the organization has an audit trail of the keys,” Davis says. “This is a classic application for key control.”

Creative solutions like control of non-traditional openings can help organizations meet business needs and increase the return on investment for contactless systems. The increased convenience, security and flexibility offered by these electronic lockers, safes and cabinets make life easier for both facility managers and employees.