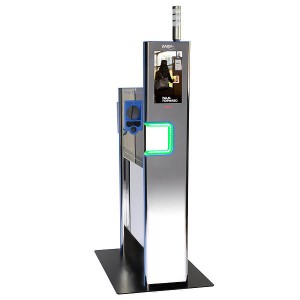 Advanced Optical Solutions Inc. is out to change the way fingerprint biometrics are captured with that it’s calling “zero-touch fingerprints,” says Keith Savas, product manager at the company.

AOS has worked with the government on satellite imagery and took that expertise to the biometric market, Savas says. The company saw a lot of interest in biometric modalities but a lack of advanced research on fingerprint technology – specifically touchless biometrics.

That was seven-years ago and now AOS has an FBI-certified system, the first contactless fingerprint system to be placed on the agency’s certified products list. Even though AOS’s technology is contactless it meets the criteria for a full contact scanner.

The company’s ANDI Zero-Contact Fingerprint system enables authorized individuals to be biometrically authenticated by just waving a hand through a window. A camera captures four fingerprints and authenticates them against those that were previously enrolled. The system displays a green light/red light to show if an individual has been properly authorized.

The basic idea for the system came out of how individual move through a building entrance, threshold or choke point, Savas explains. “The best way to go was to develop technology to maintain movement without interruption,” he adds.

One of the possible use cases for the technology is at an airport where it has to be easy to use. “We had to develop a system where someone can push a stroller or be in a wheel chair and use it without interruption,” Savas says.

Throughput is an advantage of contactless fingerprint system, Savas explains. At the Global Identity Summit in 2013 AOS did a real world test of the system and was able to verify 54 individuals in a minute.

The company has units being tested with the U.S. Defense Department, Transportation Security Administration and Homeland Security’s Customs and Border Protection. AOS is also fielding calls from the financial services market, airlines and foreign governments.

Internally AOS is working to make its technology smaller. The first systems are six-feet tall and weigh more than 200 pounds. The goal is to shrink that footprint, Savas says.