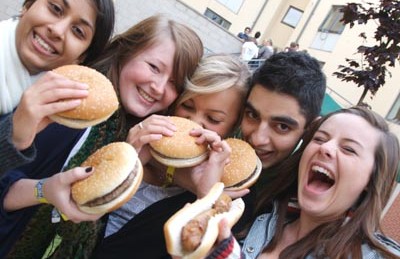 Dominican College in Orangeburg, N.Y. has 2,050 students with about 700 living on campus. The school’s campus ID is used for access to meal plans, physical areas, vending, photocopying, laundry and an off-campus program that has been in place for seven years.

The institution launched the off-campus program to give students more options to choose from and make it easier for them to pay for goods and services, says Michael Quinn, director of One Card service at Dominican. The program now includes 27 retailers, from pizzerias and Chinese food to CVS and oil changes.

Where Dominican sought to increase student service, in a down economy other universities are deploying off-campus programs to try and bring in revenue. Whatever the reason, these programs are drawing interest from national brands, such as CVS, whereas previously they had appealed largely to local businesses.

Off-campus programs can be a source of extra income for schools. At Dominican retailers pay 10% of each purchases to the college. This is then split with Heartland Payment Systems, Dominican’s campus card provider, explains Quinn.

For retailers it may seem like a hefty price to pay but in some cases they can’t wait to get involved with the program. CVS, the biggest retailer for the Dominican program, did $200,000 in sales through Dominican’s off-campus program, Quinn says.

Most of the rest are “mom and pop businesses,” Quinn says. The program started because some of the business wanted to accept the student ID for payment. Calabria Pizza & Pasta Restaurant is only a few hundred feet from the student dormitory and was one of the first to sign up.

The program typically adds two to three vendors a semester, Quinn says. A volunteer student committee is charged with finding out where students want to use the card. Using it for entertainment, such as movie tickets, is a recent trend. The college is also looking at adding the local bus company so students can use the card to pay for rides.

The student committee also puts together a vendor of the month program. Each month a vendor is chosen and special marketing is done where students can win gift cards and other prizes if they use their student ID for a purchase at that vendor.

While Dominican’s ID can only be used at the 27 merchants associated with the program, some students have found a workaround, Quinn says. Students have been purchasing gift cards at CVS with their ID in order buy things at other retailers like Best Buy.

Students are able to deposit funds into their account through the business office or an automated deposit machine, Quinn says. Dominican is adding a Web-based system to add funds this summer.

In order to accept payments from the student ID card, retailers need a separate point-of-sale device with a static phone line or a separate IP address, Quinn says. Accounts are reconciled with the university and each week the local retailers are hand-delivered checks of that week’s transaction, adding a personal touch to the program.

One of the fears with off-campus programs is that they may take money away from the campus dining service. That hasn’t been the case at Dominican, Quinn says. Upperclassmen can sign up for a platinum meal plan which includes funds that can be used both on and off-campus. Underclassmen need to add specific funds in order to use the off-campus plan.

In some cases the off-campus program has increased spending on campus, says Fred Emery, vice president and general manger at Heartland Payment Systems Campus Solutions. “Students who don’t have a meal plan may end up putting money on the card and using it on campus,” he says. “Students do go off campus but in the middle of the day they may need to eat on campus. The more students can use the card the more they will use it.”

Others point out that an off-campus program can actually save the on-campus dining program money. According to Shawn McCarthy, managing director of Off-Campus programs at The CBORD Group, “the dining operation is starting to see it as an opportunity,” he says, “if it means not staffing a place till 2 a.m.”

Despite evidence to the contrary, some still fear that the off-campus program will cannibalize the on-campus meal program, McCarthy says. To assuage those fears the CBORD group let’s the university set the tone for the program. “We have programs that only want to limit it to late night,” he says. “If the school wants it to be a delivery-only option we can do that too.”

When a university decides it wants to start an off-campus program, the first decision is whether to build it or buy it. If the campus opts to work with a provider the two will work together to decide what types of merchants to include. After that the vendor typically goes to the merchants to get them to sign up, handles any terminal deployments, supports merchants and provides technical support and handles the reconciliation between the school and the merchants.

“Campus administrators are wearing so many hats it’s hard to set up an effective program on their own,” says Emery. “We assist them with the marketing. Alleviate a lot of the legwork they have to do with the merchants so they can concentrate on building the programs and having the students use the program.”

From there each of the campus card providers has its own unique take on the off-campus program. At Heartland the company offers the Give Something Back program, says Emery. For schools that use Heartland’s service, each student is given an FDIC-insured debit account that they can use at merchants in the community. Funds can be loaded into the account through a Web interface. Give Something Back also includes a loyalty program where a portion of each purchase can be rebated to a charity or the student.

Heartland’s program also includes a network that enables students from one school to use their account at other participating schools, Emery says. For example, a student at an East coast university who is part of Heartland’s program can use their student ID at Heartland school in the Midwest or West Coast.

CBORD has made some updates to its system that makes it easier for the merchants, says McCarthy. With its older system it was taking some merchants up to 30 days to get paid. “We had a pizza merchant who reported that he was so successful he was almost out of business,” he says, highlighting the challenge of waiting long periods for funds.

There were also issues with the amount of time it took to process transaction on busy nights, McCarthy says. “Friday night students come in and if it takes 30 seconds for the card to get approval it can cause a backup,” he says.

To combat these concerns CBORD built UGryd, a hosted solution that processes transactions quickly and reconciles with the merchant, McCarthy says. Previously the university would host the system, which would sometimes cause delays. The system pays merchants on a daily basis rather than monthly.

Blackboard, which has its BbOne off-campus program in place on more than 85 campuses, see off-campus becoming a bigger part of the campus card, says Jason Tiede, director of the BbOne program. “The last couple of years the retail market has been flat and the overall economy not very favorable,” Tiede says. “These conditions are driving local businesses to look at the programs as a way to recoup lost revenue, and from the school’s point of view it’s a low-cost option to extend the card program.”

The number of venues that are starting to accept off-campus programs is also growing, Tiede says. BlackBoard is looking at directly integrating with some large national retails for card acceptance.

CBORD’s McCarthy says supermarkets are becoming a more important part of the off-campus program as well. As campuses add cooking facilities in resident halls, students need to use the ID to buy groceries.

Other future enhancements to the programs include improved marketing, McCarthy says. “Students want deals and they want a reason to use the program and the merchant wants effective ties to the students,” he says.

Some of this marketing may also include loyalty and reward programs. Off-campus programs need to do more to put the student ID card top of wallet. In a soft economy students don’t less to spend and competition between payment products or cards tightens. Loyalty and rewards could help drive student usage and thus campus revenues.

With off-campus programs, more can ...