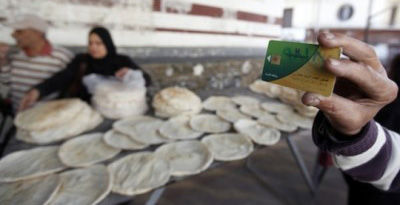 A new a smart card system for the distribution of subsidized bread is cutting wheat consumption and alleviating government waste and foreign services.

The pilot started last year in an attempt to find a solution to Egypt’s bread subsidy system that has been plagued with corruption and waste. The bread subsidy represents nearly two-thirds of the country’s $5 billion per year food subsidy costs. The new system enables the government to monitor individual consumption of bread via smart cards, which replaced the country’s previous paper credentials, and were already in use for other subsidized goods including rice and sugar.

Egypt is the world’s largest importer of wheat, purchasing an estimated 10 million tons each year – largely the result of the estimated 210 million loaves of subsidized flat bread consumed each day. According to a Reuters report, statistics compiled from the initial stage of the new bread subsidy program, located in the Suez Canal city of Port Said, suggests a noticeable drop in wheat consumption – 30%, in fact.

Under the old system, there was no limit on the amount of subsidized bread citizens could get. The new system works by allowing each smart card holder to obtain five loaves per family member per day – a number that officials hope can be reduced over time. To facilitate this, the system also features a points system that enables citizens who consume less than their quota to spend their savings on other commodities.

As of July 2013, Egypt began limiting its subsidy cards to citizens whose monthly income is below 1,500 Egyptian pounds, or $209.

Resembling a cash-transfer system, each smart subsidy card carries a certain number of points depending on the number of family members, with each commodity or foodstuff worth a specific number of points. While holders of subsidy cards are accustomed to monthly rations of cooking oil, sugar and rice, the restriction on the amount of subsidized bread is a new one.

Egyptian officials expect the program to spread beyond Port Said and be implemented countrywide in the coming months.

Off the back of the success with foodstuff subsidies, Egypt is planning a similar initiative that will issue smart cards to Egyptian drivers in order to monitor fuel consumption. This system is yet to go live, but is another example of how the country intends to use identity technology to reform its subsidy programs.