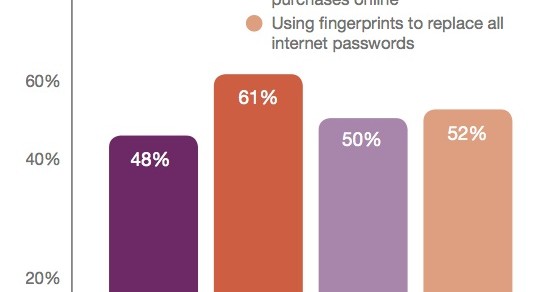 A new report from Ericsson suggests that biometrics technology in the consumer sector may yet be welcomed with open arms.

Ericsson’s report details the top 10 consumer technology trends expected for the New Year, 2014. In at number two on the list of trends is the substitution of fingerprints for passwords.

Ask anyone in the biometrics industry and they’re likely to say that biometrics in the consumer space is still in its infancy. Following high-profile implementations of consumer biometrics – most notably fingerprint – it makes sense that support for other biometric modalities are less evident.

As Ericsson’s report points out, however, web sites are demanding longer passwords – often with a blend of numbers, letters and symbols – making them almost impossible to remember. While password storage services and universal login systems offer some reprieve, they still require passwords.

It’s no secret that the password is an insufferable pain in the backside of any Internet user, and quite frankly, its days are numbered. Ericsson has seen evidence of this in its own report as well with consumers expressing interest in ridding themselves of passwords completely. It is for this reason that interest in biometric alternatives is on the rise.

Interestingly enough, Ericsson found that biometrics in the consumer space could extend beyond the mobile phone, into the realm of wearable technology. While 40% of the same sample set of 5,000 iPhone and Android users would prefer their smartphone to track their exercise and sleeping habits, there was greater interest in wearable alternatives. In fact, 56% of participants expressed a preference for a ring that could measure blood pressure and pulse, while 59% would buy a wristband that logs walking, sleeping and exercise data.

Of course, the mobile phone still plays an integral role in wearable technology as it houses the accompanying software app for wearable tech. Key to this segment of the market, however, will be the protection of personal data.

This fact is further evidenced by the 67% of respondents who stated they would not want to share their medical records. Additionally, some respondents saw their personally collected data as a counterbalance to the information that outside organizations have already collected about them.

This brings us back around to the major question surrounding biometrics in the consumer space; how do you strike a balance between usability and security? It’s a question that will need to be answered in time, but for now if Ericsson’s findings are any indication, 2014 could be a good year for consumer biometrics.

Report: Biometrics to be necessary ...