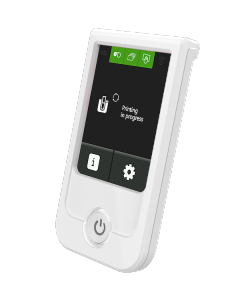 Evolis introduces a new touch screen color option for its range of desktop card printers: Primacy, Zenius and Elypso. The new color touchscreen enables the user to interact in real time with the printer without being in front of the PC.

Set in 16 languages, the touch screen of 2.4 inches by Evolis is ideal for desk applications — transport, banking, retail — and any other use for which the card printer is far from the computer. This new option can be a time saver for the users because they can set the printer directly from the touch screen, start or cancel a print job, view the status of ribbons and cards, or can even trigger a cleaning.

Evolis has given special importance to the readability and understanding of the information from the screen. The icons have been studied to be as explicit as possible. In addition, a visual step-by-step wizard guides the user through the printer cleaning. Help messages appear to solve common problems, and a beep sounds when an error occurs. The printer screen also gives the opportunity to personalize the contact information with the contact details of the reseller.

The color touch screen is now an option available for order for the Primacy model and upon request for specific projects on the models Zenius and Elypso.

Sensory announced the release of its face and voice biometric fusion app called AppLock on the Google Play store. The app adds an extra layer of security to any mobile app. AppLock combines an intuitive user interface with face and voice biometric authentication technologies to keep prying eyes out of personal apps, making it so that only the device’s owner can access them.

Once AppLock is installed, users are taken through an enrollment and setup procedure that takes less than a minute. During enrollment, users are given the choice of three pre-determined voice passphrases or can set their own user-defined passphrase. Then, by looking at the camera and repeating the selected voice passphrase three times the user is enrolled, and can then select which apps they want protected, as well as the level of security they prefer for each.

AppLock offers two modes of biometric security, convenience mode which utilizes either face or voice based on whichever biometric is verified first, or TrulySecure mode which requires verification of both face and voice biometrics in order to access an app. In the advanced settings menu, users can further secure their apps by enabling liveness detection, ensuring that a photo of the user wont trigger a false accept.

When opening any app protected by AppLock, a window instantly appears prompting the user to get in sight of the camera, while in parallel the microphone begins listening for the user’s voice saying the enrolled passphrase. The user verification process is nearly instant, and once identity is verified the window quickly disappears and the app opens.

Unlike other biometric security apps that require special biometric sensors that are not a standard feature of all devices, AppLock only needs a front facing camera and microphone.

AppLock is powered by Sensory’s TrulySecure technology, a face and voice biometric authentication solution. Sensory offers TrulySecure SDKs for all major operating systems that can be licensed to mobile device manufacturers and app developers interested in employing biometric fusion technology in their own products.

DLRS Group, an Irish security printer, and HID Global announced that the new Irish Passport Card has won the Regional Best ID Document of the Year Award 2016 by Reconnaissance International at the 2016 High Security Printing Conference in Bucharest, Romania.

The program’s prime contractor DLRS Group joined forces with HID Global, Absolute Graphics, and Purple Pod to design and produce Europe’s first passport card, which has been in circulation since October, 2015. The award was presented to Ireland’ Passport Service Department of Foreign Affairs and Trade.

The credit-card sized card is the first and only passport card deployed in Europe for border crossing. It allows Irish citizens to travel across Europe without their traditional passports. The award recognizes the Passport Card for its innovative design, the combination of state-of-the-art technologies and a unique mobile application process. Citizens can obtain the card by applying online or through a smartphone app that allows the applicant to submit a compliant photo from a mobile device. Payments are made through a secure payment gateway.

The card combines optical security media and an ICAO-compliant chip, which together provide high levels of protection against attempts at fraud and counterfeiting. Other innovations optimizing the card’s reliability, durability and security include a highly secure personalized embedded hologram photo; a unique anti-crack technology that protects the card from daily wear and tear; and direct bonding, which minimizes the space required for the chip, allowing the combination of security features.