Facebook reigns as choice for social logins but Google closing

Changes on the horizon for social logins in 2015

Facebook is in the lead with 43% of consumers who use federated logins choosing the social network but Google is closing with 40%, according to research from Janrain. The two largest players in this space will continue to duke it out in 2015 as both are also expected to make some significant changes to their federated identities. 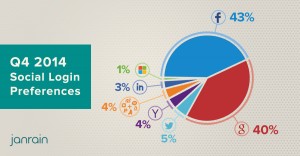 The search engine giant gained 6% of total social logins in the fourth quarter of 2014 after a 3% slip between Q2 and Q3. This also represents the largest quarter-over-quarter increase in logins across all sites for any of the top identity providers in over two years.

Google’s rise can be attributed to its increased ubiquity — it’s a one-stop identity to manage Gmail, Play, Android, YouTube and Google+ accounts — so consumers are now choosing it to manage other accounts as well.

Janrain predicts that the numbers will get even tighter in the next few quarters as Facebook migrates to its new app version introducing line-by-line controls and the anonymous login option. The social network also has a renewed focus on consumer data privacy that may help Facebook regain some of the market share it lost this past quarter.

There was little other change among the other identity providers in total market share but there were some shifts within some vertical markets. LinkedIn saw a big jump across B2B web sites in the quarter, increasing their share of total logins from 29% to 35%.

It’s likely that that B2B companies are starting to understand the benefit of offering LinkedIn as a social login option, one that includes professional data such as positions held and a verified email address. Consequently, both Facebook and Google lost a 3% share in this space.

Consumer brand web sites also witnessed changes this quarter. In an area that arguably serves the largest number of addressable customers, Google’s total share of social logins jump 7% to 38% in Q4. Facebook’s share decreased 3%, from 52% in Q3, to just under half of total logins at 49% in Q4.

Janrain predicts that there are some big changes on the horizon for social logins in 2015 and Facebook and Google are expected to make some big changes. Facebook is going to require those that consume user identities to go through an audit that will require them to explain what information they are collecting and why. Facebook will then have the authority to deny access to information if they deem a company’s rationale insufficient.

Google is also preparing to deprecate their Google login on April 20, in favor of a universal Google+ option. If a site is using Google as a social login option, it must migrate to the Google+ identity provider within your application prior to the sunset date to ensure that login doesn’t fail.