One element of Obama’s Feb. 2016 Cybersecurity National Action Plan created the Commission on Enhancing National Cybersecurity. The new body’s purpose was to develop recommendations to strengthen cybersecurity in both the public and private sectors.

The commission’s 90-page report, Report on Securing and Growing the Digital Economy, was released Dec. 1. It calls on the incoming Trump administration to enact a series of initiates within its first 100-days in light of “the urgency of the challenges facing our nation.” 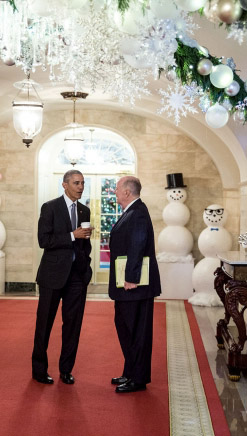 The document was more direct than earlier government reports in its recognition of identity and authentication’s importance to overall cybersecurity. Citing that “a review of the major breaches over the past six years reveals that compromised identity characteristics have consistently been the main point of entry,” the report goes on to suggest that “the shared goal of both the public and private sectors should be that compromises of identity will be eliminated as a major attack vector by 2021.”

Obama commented on the report, citing accomplishments during his tenure, including:

He asks that the Commission brief Trump’s transition team on the recommendations and urges Congress to “fully fund the urgent cybersecurity needs that my Administration has identified in my 2017 Budget and elsewhere.”

What are the recommendations?

Following an obligatory overview of the state of cyber security and the abundant threats, a series of six imperatives, 16 recommendations and 53 related actions are presented.

2. Innovate and accelerate investment for the security and growth of digital networks and the digital economy

3. Prepare consumers to thrive in a digital age

5. Better equip government to function effectively and securely in the digital age

US Chamber of Commerce pushes for n...