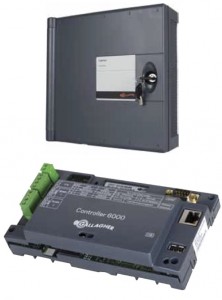 Gallagher started out helping businesses with animal management, farming, wild game and zoos but realized that protecting and managing animals of the four-legged variety could translate to securing facilities for two-legged people, says Brandy Sloan, business development manager for the federal space at Gallagher.

The company started in the physical access control space though an acquisition in 1999 and entered the U.S. federal market three-years ago. Gallagher built a 58,000-square-foot facility in Kansas where logistics and administrative tasks are handled.

The company put a focus on innovation, investing 15% back into research and development every year, explains Sloan. Gallagher has been using public key cryptography in its physical access control products since 1999, Sloan says. At first this was used to make sure rogue devices weren’t being used in the system but Gallagher can now conduct full PKI validation without the need for any third-party hardware. With the exception of a third-party enrollment client, the company manufacturers everything from the controllers, readers and input/output boards.

A key product for the U.S. market meets the requirements of FIPS 201 and PKI at the door, Sloan says. Using IP-based physical access — rather than the traditional Weigand protocol — Gallagher has shaved 400 milliseconds from the transaction time. This may not seem like much but when an employee is holding a card up to a door waiting for it to open every little but helps, she adds.

Gallagher’s products also have high-speed data transfer capabilities of one megabit per second. Its readers receive firmware updates remotely, eliminating the need for an administrator to update each reader with a command card, Sloan explains. The PIV controller also includes intrusion detection and perimeter controls so enterprises don’t need an additional controller. It also handles video monitoring and the ability to read mobile devices and wearables. “This ability for physical access control systems to apply authorization policy to an increasing number of things increases business value and creates a significant growth opportunity for security providers,” according to Salvatore D’Agostino, CEO at IDMachines.

Gallagher released a white paper last month that outlines the FIPS 201 requirements and what needs to be considered for migrating physical access control system components. The paper can be downloaded here.