Mobile devices are not just an efficient way for retailers and marketers to reach consumers. According to a new paper, devices such as smartphones, tablets and even body cameras can help secure borders via real-time identification of travelers and other tasks.

Mobile technology is increasingly being deployed for front-line tasks in law enforcement, including policing and borders

The report from the Secure Identity Alliance, “Strong Identity/Strong Borders,” provides a primer on the reasons to secure borders in the early 21st century, and gives example of how to do so via some of the latest technology. The most forward-looking sections of the paper involve mobile technology, which the alliance, dedicated to the development of digital identity, said is “increasingly being deployed for front-line tasks in law enforcement, including policing and borders. This can provide real-time access to complex I.T. systems at the front-line, with facilities developed specially for these roles.”

The report highlights these uses for mobile devices in securing borders: 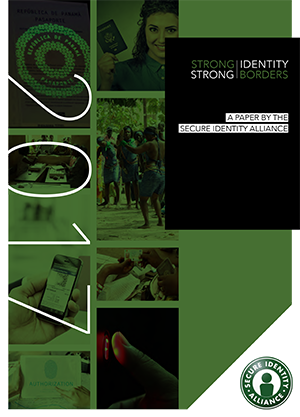 The 17-page paper also promotes the concept of securing borders via a wider use of biometrics. “Multi-mode biometrics can potentially allow faster and more accurate searching of a large collection; can be more robust in finding a match if some data is incomplete or poor quality; or enable a link to other systems where different biometrics have been stored,” the alliance says.

Fingerprints might end up being one of the main biometrics deployed to better secure borders. Still viewed by much of the public in a negative light—after all, countless TV shows and movies have hammered home the idea that fingerprints exist in the realm of the criminal—newer systems on smartphones that use fingerprints to authenticate identity and payments are working to change that perception, the paper says.

“Use of biometrics and integration between passengers, border services and airport operations will increase,” the paper predicts. “Data analytics, deep data mining, deep learning and applying smart interpretation to large collections of data will become increasingly important in detecting anomalies in large volumes of data and highlighting possible risks for investigation … (and) mobile solutions are likely to become more prevalent for border services.”

Travelers will give up biometrics f...