All signs are pointing toward a pending golden age for iris recognition biometric technology.

Citing falling costs, robust applications and more mature hardware, many experts predict the scanning of the colored portion of people’s eyes to become a widespread method of identification.

“Iris is the golden biometric,” says Mark Clifton, president of the products and solutions division at Princeton Identity, formerly SRI International. “Everybody wants to use it, but in the past it was too expensive and too hard to use, but that is changing.”

From a product perspective, many iris scanning devices are now hitting a balance of ease of use, accuracy, price and performance, says Joey Pritikin, vice president of marketing and product management for biometrics firm, Tascent.

If you looked back just five years ago and spoke about viable, cost-effective and useful biometrics in the commercial marketplace, the only real contender would have been fingerprint, says Tim Meyerhoff, director of the North America division for Iris ID Systems.

Iris never came up as part of the conversation because it was hard to use and expensive, Clifton says. But fingerprints have limits that iris does not. In fact, iris stands out in many ways above the other commercially viable biometric identifiers.

From the age of two, an individual’s iris represents one of the most reliable biometric markers, Clifton says. That is because once your iris finishes developing, it is stable and changes only slightly as you age. The same can’t be said of fingerprints, which might be obscured temporarily by grease or moisture, or even damaged by scars, scratches or other impacts that arise from working with your hands.

The scans are so accurate that they could be used in a tokenless environment with a very high level of confidence. Compared to other modalities, iris recognition boasts low false positive rates – more so even than fingerprints

Irises are one of the few internal organs that are visible from a person’s exterior and thus hard to fake. And while the first generation iris scanners needed people to place their face against a device, the current generation of scanners no longer needs physical contact with the person it is reading. Now, it can be done reliably from a distance, adding to the speed and cleanliness of the process.

The scans are so accurate, Pritikin says, that they could be used in a tokenless environment with a very high level of confidence. Compared to other modalities, iris recognition boasts low false positive rates – more so even than fingerprints, he adds.

Though its use has not yet been widespread, iris technology has already found numerous applications. In 2010, the Unique IDentification Authority of India launched an ambitious program to scan the irises of more than 1 billion residents. Chief among the project’s goals was to help weed out fraud in entitlements programs. 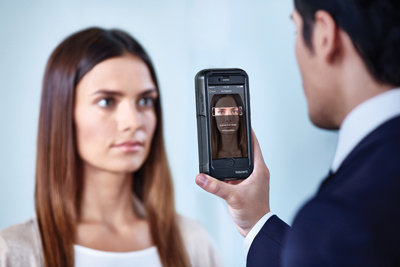 It has also been deployed in other high-volume applications, such as refugee processing and airport security at high-profile locations including London’s Gatwick Airport. Access control and workforce time management are two other applications embracing by iris technology.

A number of factors have combined to make iris technology increasingly accessible. The first is that many of the key patents covering iris biometrics – from capture to recognition – have recently expired.

“Before the patents expired, there wasn’t a multi-vendor ecosystem,” Pritikin says.