Penn ranks at the top 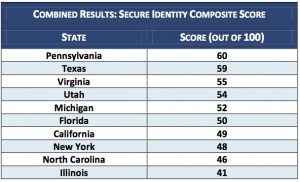 The Secure ID Coalition released a report “State Secure Identity Practices and Policies” ranking some states on where they fall with security identity practices.

The vast majority of identity credentials used by U.S. citizens are issued at the state level. Driver licenses and benefit programs – Medicaid and food assistance – are all administered by the states, says Kelli Emerick, executive director at the Secure ID Coalition. And while the state issued that credentials the money that fund those projects mostly come from the federal government.

The state processes have become a foundation of personal identity verification and that’s why it’s important to look at what the local jurisdictions are doing when it comes to identity. The report focuses on 10 states that were chosen by reputation, they maintain reputations as technology leaders and have instituted innovative identity initiatives; and by population, the 10 states account for a majority of the overall U.S. population.

The results of the survey are as follows:

Pennsylvania is a leader with respect eGov Practices and Health & Safety Identity Documents. The state’s NSTIC pilot involves an interoperable “Keystone ID” that enables citizens to access online services hosted by multiple government agencies. The state has mostly done away with paper-based benefit cards, however it could significantly improve the both identity security and the accurate distribution of welfare benefits through the adoption of chip-enabled payment cards. The Keystone state was also the weakest state when it comes to legal landscape.

The state’s ranking was primarily driven by its practices related to Benefit Card Identity Management. The state’s decision to do away with most of its paper benefit cards and institute a chip-enabled benefit card improved its standing and will continue to reduce benefit fraud. Although Texas is not currently implementing an NSTIC identity and access management pilot, its relatively secure primary identity documents along with its decision to participate in First Responder Access Credential is also commendable.

Virginia, which came in third, should also be commended  for its innovative eGov Practices. The state’s decision to participate in an NSTIC pilot, maintain a centralized cybersecurity office, and participate in First Responder Access Credential separated itself. Notwithstanding these actions, Virginia has significant work ahead when it comes to revamping its Benefit Card Identity Management.

Illinois came in last place as the least identity secure state examined in the report. The state has work to do in the areas of Benefit Card Identity Management, eGov Practices, Primary Identity Documents, and Health & Safety Identity Documents. North Carolina, the state in second-to-last place, also has significant work to do with respect to Benefit Card Identity Management. Both states still use paper cards to distribute public assistance funds, which are both insecure and limit interoperability.

The full Secure ID Coalition report can be downloaded here.