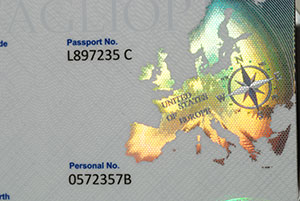 Incidences of fake driver’s licenses in the U.S. and reports by China’s state run Xinhua news agency that 40% of items sold online in China are either counterfeit or of bad quality, reiterate that the battle to beat the criminals, particular those involved in ID counterfeiting, remains to be won.

However, governments, security agencies and brand owners are fighting back with the latest in advanced hologram technology. Over the last 30 years, since they first appeared on UN passports, holograms have made rapid gains in ID anti-counterfeiting, moving initially from an authentication device to the protection of personal bio data contained within the passport. This has been further underpinned by the EU which saw adoption in 2004 of its draft security standards for passports.

This saw incorporation with EC Resolution No 2252/2004 for minimum standards, stipulating that “An optically variable (OVD) or equivalent device, which provides the same level of authentication and security as currently used in the uniform visa format, shall be used on the biographical data page and shall take the form of diffractive structures which vary from different angles incorporated into the hot-sealed or an equivalent laminate (as thin as possible) or applied as an OVD overlay, or stickers on a non-laminated paper inside page (as metallised or partially demetallised OVD with intaglio overprinting) or equivalent devices.”

Another major driver for the inclusion of holographic technology on ID documents came when the International Civil Aviation Organization specified in 2002 that passports should feature optically variable devices like holograms to combat counterfeiters, particularly in the wake of 9/11. Machine Readable Travel Documents of ICAO Doc9303, Part 1 Passports, 6th Edition. This states that “When the biographical data page of a passport book is protected by a laminate or overlay, an optically variable feature (preferably based on diffractive structure) should be integrated into the page. Such a feature should not affect the legibility of the data…The inclusion of a diffractive optically variable feature is recommended to achieve an enhanced level of protection against reproduction.”

Identification documents are big business, worth hundreds of millions of dollars a year to designers, producers and suppliers of passports, driver licenses and pass cards, and is driven by events such as 9/11, increased security in the wake of the threat of increased global terrorism, a more transient and migratory population and the need for better and more effective identity confirmation for all types of access or services. Today, holography remains a security feature of choice to secure the critical personal data in a passport — Keesing Reference Systems estimated back in 2012 that more than 55% of passports use an optically variable device to protect data, and of this 67% were DOVIDS — or an ID card against interference, tampering, alteration, forgery or counterfeiting.

The overall production of passports, which is currently estimated to be upwards of 300 million per year, may fluctuate, but undoubtedly continues to grow as populations increase, and more and more people travel abroad. This allied to the fact that all ICAO member countries must now issue machine-readable passports with ICAO recommending the use of OVDs, all but guarantees a growing market for a security holography industry.

The role of a hologram on a passport and other identity documents is principally to shield against the forgery of the photograph and personal data, otherwise known as the “variable information.” However, the ability of the hologram to provide effective protection lies in the continuous innovation, invention and evolution of holographic techniques. Both optical effects and material science techniques have created authentication devices that are easily recognised yet difficult to copy accurately. They can be safely integrated within the production process and stand up to the rigorous demands of being in use for a period of anything up to ten years.

Of course virtually anything can be copied, and the holography industry continues to work hard to get the message across that even the most sophisticated holograms can be reproduced to some extent. The real issue is just how accurately can holograms be copied? The answer is that the intrinsic features of holograms mean that the techniques and visual effects make it difficult to copy 100% accurately a well-designed security hologram.

This is where the real value of holograms designed for security applications should be appreciated. This has ensured their success – the document they protect may have been counterfeited but, whereas it can be relatively easy to simulate the effects of other overt features, a poorly copied hologram is more often than not the tell-tale sign that all is not what it appears.

Authentication alongside the protection of personal data — name, date of birth and photo — must be guaranteed, whether that data is on a passport, driving licence, national ID card or any other ID item. Effectively, holograms serve not only as a deterrent and secure means of protection and authentication, but also as a warning that it might be counterfeit. Therefore, a hologram is not solely to prevent counterfeits but acts as an effective detection device, making it easier for the trained eye to distinguish the legitimate from the fake.

Passport production and critically, personalization, is exacting and has proved technically challenging for the holography industry. However, it is one that manufacturers are responding to, with recent developments including a whole new generation of personalised photopolymer holograms which match the bio data contained within the passport.

Today, material science is playing as significant a part as optics in the development of holography. Indeed, a data page with a holographic thin film overlay is so tamper proof that the illicit trade in false passports has moved to attempting to match a person to the photograph rather than trying to alter the actual passport. Polycarbonate technologies are also taking a larger share of the passport and ID market and, here too, the holography industry has shown its capacity for innovation and technical competence through the creation of products that are so fully integrated into the data page or card structure that it cannot be delaminated.

Holograms continue to play an important part in moving hitherto successful ID documents to the next stage of development as authorities and security agencies look to remain one step ahead of the fraudsters and criminal gangs. For instance, Interpol has now raised the bar even further with the introduction of its second generation passport as it seeks to take advantage of the most advanced features available.

Holography has also gained further traction as an integral part of the UK’s much vaunted Proof of Age Standards Scheme (PASS) following the launch of 18+ PASS card design that features on 18+ CitizenCards. The new design displays the PASS hologram together with the logos of the Association of Chief Police Officers, the Trading Standards Institute and the Security Industry Authority (SIA) that licenses bar and club door staff across the UK. Welcoming the new design, Andrew Chevis, CitizenCard’s Chief Executive, said: “The police and door staff are literally on the cards and every major bar and club operator has welcomed the new design.  Any adult across the UK should be able to use these cards in bars, clubs and elsewhere without any difficulty. The new card is a fitting way to celebrate CitizenCard’s 15th Anniversary.”

It’s clear that holograms remain not only the single most used overt authentication device but, increasingly these days, multi-function devices that include covert features, codes and smartphone reading capabilities; reinforcing their role as an effective, eye-catching and value added security feature of choice for safeguarding the critical personal data in a passport or on an ID card against tampering, alteration, forgery or counterfeiting.

The International Hologram Manufacturers Association (IHMA) is made up of almost 100 of the world’s leading hologram companies. IHMA members are the leading producers and converters of holograms for banknote security, anti-counterfeiting, brand protection, packaging, graphics and other commercial applications around the world. IHMA member companies actively cooperate to maintain the highest professional, security and quality standards.