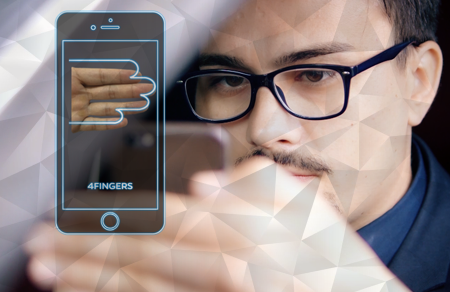 Hoyos Labs’ new four fingerprint biometric ID has been downloaded 24,000 times in the last week. The company says the 4FingerID is being incorporated into mobile apps for additional security by a number of companies.

The mobile user opens the 4F app and sees an image for lining up the fingers. The smartphone camera takes a picture of the four fingers together with the thumb folded over the palm. “You hold your right or left hand in the rear of the phone at any distance that you’re comfortable,” says Chairman and CEO Hector Hoyos. “You have to position your hand so that your fingers are in the glove on the screen. When it detects that your hand is in the right place, it automatically acquires the fingerprint and matches it within a couple of seconds.”

Hoyos says the app is user friendly because of the glove guide and the light source. “Because we’re using the LED flash, it allows us to build in likeness verification to make sure that you don’t have a spoof – a photo or video of the four fingerprints of the hand,” Hoyos says. The LED flash pulses at multiple frequencies to create a hyperspectral image of the fingerprints.

Hoyos says 4F can be used anywhere, even by law enforcement. “The images acquired by 4F on a mobile phone are compatible with the images that exist in law enforcement databases,” Hoyos says. “You can take a $99 Android phone and book your suspect, acquire fingerprints and send them for verification. That’s where we’re going with this.”

4F has already been built into apps for “a variety of companies,” including an unnamed “top pharmacy” that will deploy it next month for customers picking up prescriptions.

Hoyos Labs’ 1U app can be downloaded free from the Apple store. It contains the 4F biometric which can be used to secure bank accounts or websites. It’s available on iOS and coming soon to Android.

Stanley CSS and Hoyos partner for b...