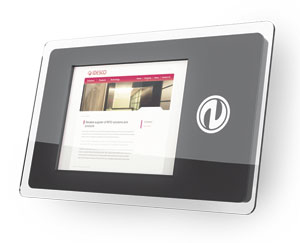 Idesco has announced the Access Touch touch screen terminal, featuring an integrated computer with an internal RFID reader. The touch screen device can be used as a standalone unit without being connected to another system or it can be integrated with other Idesco reader devices as the control unit of a completely wireless access control system.

Access Touch operates with Linux or Windows operating systems and offers the same possibilities for processing data as a traditional PC. The integrated RFID reader makes the device the first step in building a versatile identification, tracking, vending or access control systems. Possible uses include tracking attendance and payments, alarm control and a number of custom applications.

The device also features a Scandinavian-influenced design and a logo design area under the front panel that can be customized with customer-specific logos and color themes.

Internet based applications for wir...