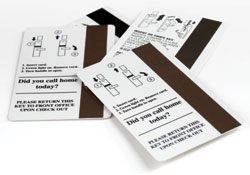 Mythbusters: Can a mobile phone erase a hotel key card?

It’s a warning any seasoned traveler has probably heard: Don’t carry your hotel key card in the same pocket as your cell phone or the card could get erased. Some travelers cautiously heed the advice, while others write it off as urban legend.

Even among card industry professionals, there are varying opinions on whether cell phones can actually erase or damage data from magnetic stripe cards. There is agreement, however, that there are other variables that will damage these cards.

CPI Card Group, a card manufacturer based in Littleton, Colo., believes it has evidence of the cell phone-mag stripe correlation. CPI manufacturers a mix of magnetic stripe cards, including payment cards as well as gift cards, hotel key cards and casino gaming cards. “A lot of the cards people tend to use in harsh way,” explains Julie Hermanson, quality control manager for CPI.

Cardholders typically protect their credit cards in an enclosed place such as a wallet, but hotel key cards are often carried in a person’s pocket next to their cell phone. “The mag stripe is often exposed to magnetic fields that can cause the encoding to degrade or erase,” Hermanson says.

In 2009, CPI conducted internal studies in which card users carried mag stripe movie theater cards in their pockets with a cell phone that had no magnetized case around it. After the cards were carried with the cell phone for about three hours, testers started to see the encoding on the stripes being disturbed.

When the problem is truly with the magnetic stripe, outside interference is most often the cause. “The number one issue was cards being demagnetized by being carried next to a cell phone or set on a TV in a hotel room,” Hermanson says. “Anything with an electromagnetic field transmitting from it can cause a mag stripe to demagnetize.”

Often, however, the problem is not really with the mag stripe material. Frequently when problems are reported, it turns out that the encoding equipment needed to be cleaned or maintained, or there were lock malfunctions at the hotel, Hermanson says.

“I have been in this industry for 16 or 17 years, and I have yet to find an instance of a card accidentally becoming demagnetized by a source other than an actual encoder or an outright magnet,” he says.

Cunningham expressed doubts even after seeing the CPI study, pointing out that the test utilized cards at the bottom of the coercivity spectrum, meaning the cards most easily erased or damaged.

Cunningham travels about 12 weeks of the year for work and frequently comes into contact with hotel key cards. In his own travel experience, he has seen hotels propagate the cell phone-key card theory.

After receiving two room cards and checking both to make sure they worked, he put one in his wallet next to his credit card. He left the other in a shielded sleeve in his room.

The next night, the key in his wallet still worked. On his third night, which was an extended stay, neither card would open his door. “The first words out of the mouth of the person at the desk were, ‘Did you have it in your wallet with your cell phone?'”

“I can almost guarantee you that when I booked my room, they didn’t book my third night. So when I went up that night, the key cards didn’t work,” he says. “But the first thing that came to (the attendant’s) mind was that I must have somehow erased them.”