Secure elections and more efficient government services stand as the main benefits of expanding the scope of national digital ID programs, according to Toomas Hendrik Ilves, the former president of Estonia, a country whose Estonian digital ID initiative is the envy of much of the world.

Ilves, who served from 2006 until 2016, told attendees at the Brain Bar Budapest tech festival that every European country should adopt government-issued national digital IDs. “Digital IDs are the key because the whole theft of identity is the central issue,” he said in a recent follow-up interview with TNW.

But before any of that can happen, governments need the majority of citizens willing and able to participate in national digital ID programs. If only a minority takes part, the program is all but assured of failure, IIves told TNW. “The problem with [digital IDs] is that you don’t get the services unless its universal,” he said. “There are always early adopters, perhaps 15 percent, but governments and companies will not develop services for only 15 percent of the population.” 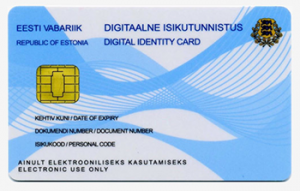 Describing Estonian national digital ID card initiative, former President Ilves says there are always early adopters, perhaps 15 percent, but governments and companies will not develop services for only 15 percent of the population. Thus you need to strive for mass adoption.

Still, the former president is optimistic that more countries will soon enough create digital IDs for their citizens, and that having a secure online identity will emerge as a standard, not an exception. “You need a sovereign to do it,” he said. “Of course you can have a company that guarantees your identity, but what guarantees the company?”

Working toward that standard will help locals—in this case, Estonians—who have already adopted strong online identities, he added. That’s because in the EU, having digital ID programs in other countries would, for instance, make it easier for an Estonian on holiday to access medical and pharmaceutical services. “Technology is everywhere, and everyone has access to it, more or less,” he said. “It really comes down to polices, laws and regulations.”

Estonian use of digital ID for voti...