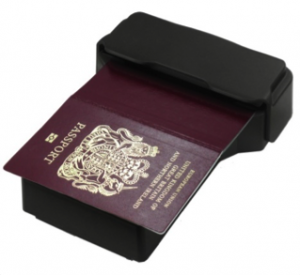 The new regulations, mandated in Europe and finding favour worldwide, bring a new level of protection against eavesdropping through enhanced cryptography and the ability to use measures such as Card Access Numbers.

The OCR601-Mk2 sees minor changes to support this new document standard whilst the OCR640e sees a major overhaul from its predecessor providing a significant speed and performance improvements.

Developed to meet the demands of existing customers who want to add Contact Card reading ability to their operation whilst retaining the usability that the existing form factor delivers. The new OCR601-SC is a four-in-one device offering MRZ, RFID, two smart card slots and two Secure Access Management modules.

This news follows an announcement from the NFC Forum in September 2014 that it has added analog testing to its certification program. The NFC Forum analog certification offers the world’s first detailed evaluation of the radio frequency performance of an NFC device, confirming that the certified device fulfills the RF requirements and is compliant with the NFC Analog Technical Specification.

Skimming occurs when the attacker uses an unauthorized reader to access information on the unsuspecting victim’s RFID card or tag without consent. From that point on, the attacker can control when and where unauthorized entries may occur. An eavesdropping attacker recovers the data sent during a transaction between the legitimate reader and card. In a relay attack, the invader relays communication between the reader and a tag which lets the attacker temporarily possess a clone of a token, enabling the assailant to gain the associated benefits.

To prevent these attacks Farpointe has released MAXSecure, which provides a high-security handshake, or code, between the card, tag and reader to help prevent credential duplication and ensure that your readers will only collect data from these specially coded credentials.

For those familiar with mechanical access control, it’s the electronic security equivalent of a mechanical key management system, in which a specific organization is the only one that has the individual key that they use. Such keys are only available through their integrator and their integrator never provides another company with the same key.

MorphoTrak announced Scott Swann has joined the company as the senior director of innovation for the Criminal Justice and Public Safety Business Unit.

In this role, Swann is responsible for identifying, researching and developing customer solutions, leveraging Morpho’s biometric and security technologies. He most recently served as special assistant to the FBI executive assistant director of the Science and Technology Branch. Swann is a well-recognized leader in the advancement of biometric technologies.

During his many years serving the FBI, Swann fulfilled several strategic missions. In his most recent Special Assistant role, he helped the executive assistant director of Science and Technology manage priorities for the largest branch budget within the FBI.