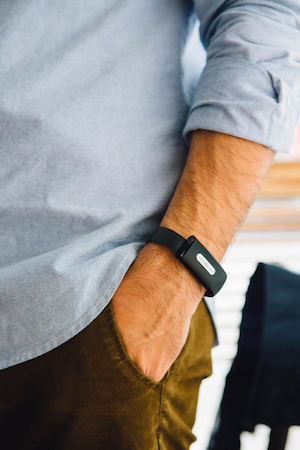 Nymi has been piloted with MasterCard, banks in Canada and has a partnership with Ping Identity for use in the enterprise market, says Shawn Chance, vice president of market strategy at Nymi. The company has also shipped a “few thousand” Nymi developer kits.

All this activity and there isn’t a product available to purchase. This is going top change this year as the official launch will take place in mid to late 2016, Chance says.

For those not familiar with the Nymi it uses the wearer’s electro cardiogram (ECG) as a unique identifier. Nymi has conducted research of ECG, testing subjects at the University of Toronto. The study showed the accuracy might be greater than other biometric modalities.

So the band performs the authentication and then uses either Bluetooth Low Energy or near field communication to transmit the credential, Chance says. The addition of NFC is relatively new feature to the Nymi so it can be used for payments or with legacy physical access control systems that use contactless smart cards, Chance explains.

With NFC, the Nymi band would be continuously authenticating and the user would walk up to a reader, hit a button on the band, the credential would be transmitted and the door opened or transaction approved.

The Bluetooth functionality would be used for access to mobile devices, laptops or desktop computers. Again, the Nymi band would be authenticating in the background and when a user needs access the band and device would communicate and enable access. If the user walks out of range from the computer or device it will be locked as well. In both use cases no credential will be transmitted unless the individual has been positively authenticated first.

As Nymi gets closer to its official launch it’s showcasing its use in the enterprise market, Chance says. The company is focusing on how it can integrate with identity and access management systems used by Fortune 500 and 1000 firms.

MasterCard employees have been testing the bands for use in physical and logical access, Chance says. The payment pilots have been with TD Canada Royal Bank of Canada.

Nymi: The bracelet that uses heartb...