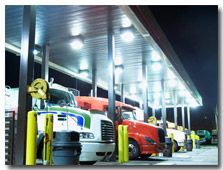 QuikQ LLC, a privately held software development company based in Franklin, Tenn., announced it has been awarded North American VAR Partner of the Year by Impinj Inc.

The SmartQ system is a cardless fueling program that uses RFID technology to initiate transactions at the fuel island instead of requiring the presence of a card to facilitate the process. It offers a faster and more efficient way for commercial vehicle drivers to fuel while also reducing fraudulent transactions and streamlining the entire fuel purchasing process.

TravelCenters of America rolls out ...