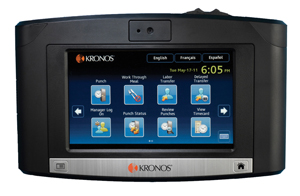 Retailers turn to biometrics for time and attendance

Last year, some KFC restaurant franchisees in the South and Midwest replaced their PIN-based time and attendance systems with DigitalPersona’s U.are.U fingerprint scanners in a bid to reduce fraud.

“Buddy-punching is completely gone from our stores now that we’ve switched,” says Chris Elwood, Omaha area coach for KBP Foods, a KFC franchisee. “Everyone is required to use their fingerprint to get into our systems and anyone clocking in early or staying late has to get a manager’s fingerprint for approval. This gives us peace of mind that our labor costs are accurate.”

In April, restaurant chain Hooters replaced the PIN and magnetic stripe card system used to log both transactions and work hours by more than 4,000 employees. The moved to a new solution that uses biometric fingerprints, a move that reduced transaction and payroll fraud while also eliminating the cost of replacing lost ID cards, says Wes Marco, director of information systems at the chain.

“The beauty of biometrics is the accountability. Unlike swipe cards or PIN-based systems, with fingerprints, no one can clock you in but you. You can’t pretend to be someone else,” says Gary Oberman, business development manager for OEM and Developer Sales at DigitalPersona. “It virtually eliminates time clock fraud.”

The costs savings could be considerable. The American Payroll Association estimates fraudulent time clock usage costs businesses 1.5% to 5% of gross payroll annually. According to a Nucleus Research study, the cost of buddy-punching, or having a friend or coworker clock in for an employee who has not yet arrived or has gone home early, accounts for 2.2% of gross payroll.

Fingerprint scanners can be integrated into already existing employee databases for punching in and out, Oberman says.

Deployment doesn’t take long. “The average business can install software and readers and be up and running in 45 minutes or less with integration with other software,” says Neal Katz, vice president of operations at Count Me In, a software developer that integrates biometric readers into existing systems and offers its Timecard Monitor time and attendance solution. Clients using its biometric time and attendance solutions include Dunkin Donuts, Huntington Learning Centers and FTD florists.

Most fingerprint scanner systems do not store an actual image of employee fingerprints. Instead they record a template–an encrypted, mathematical representation of the fingerprint generated with a proprietary algorithm. The stored data can’t be used to reconstruct an image of a fingerprint, and is not linked in any way to any criminal or government databases.

Most employees, once they learn how the scanner works, don’t mind putting their fingerprints into the systems. “Nine times out of ten they love it but part of that is demographics. With our point-of-sale clients, many have younger employees, and they are people who are interested in new technology and are early adopters,” Oberman says. “They think it’s cool.”

For other employees, it can act as a deterrent. “Even though the technology doesn’t tie into any other government databases, our clients have told us it has weeded out some applicants,” who fear that their fingerprint could be matched with other unsavory information, Katz says.

A small medical practice that installed a fingerprint system had two employees immediately quit, explains Katz. “Apparently, they had made a habit of not physically being at work for all of the hours they claimed,” he said.

Labor costs and labor fraud are a big concern for companies, which is why there is a tremendous upside for these solutions. “The market is still pretty wide open,” Katz says. “There are still huge numbers of businesses keeping track of time with paper or simple spreadsheets.”

“When we first started out in 1998, we were told over and over that there was no place for fingerprint in time and attendance. It seemed too much like science fiction. People didn’t understand the potential,” Katz says. “Today every single player out there in time and attendance has biometrics in some form.”

Kronos sells a variety of biometric time and attendance products, such as Kronos 4500, 4500 Touch ID, and 4510 Touch ID terminals. Employees can use a badge or fingerprint to clock in using the terminal, and can access information on how many hours they’ve worked, view their schedules, and the amount of time off they have available.

ADP offers biometric time and attendance products with the option of hand or fingerprint scanning. Small players are also vying to fill the small-business segment of the market, selling low-cost bundles including both software and fingerprint scanners.

DigitalPersona sells the U.are.U series of fingerprint scanners, offering a USB fingerprint reader compatible with desktop and laptop PCs; a heavy-duty scanner for high-traffic locations such as kiosks, point-of-sale terminals, time and attendance terminals, and physical entry devices; and a Windows-compatible keyboard with a built-in fingerprint scanner, for use with desktop computers and point-of-sale terminals. The readers and software are compatible with Windows and Linux-based systems as well as accounting software such as Quickbooks, Peachtree, and Paychex systems.

Other companies are trying to solve complicated time clock issues with other solutions. In May, Utah-based FotoPunch launched FotoPunch Connect, Mobile Time and Attendance, which turns a cell phone into a geolocated biometric time clock.

Employers can track the employee’s hours, location and identity, as well as track job costs and collect work-related photos, all without the purchase of additional hardware. Employees clock in to by taking a photo with their smart phone. Nucleus Research said the product’s benefits include increased manager and employee productivity, reduced payroll costs, and the savings associated with not buying new hardware.

Biometric time and attendance solutions are now used in a wide range of industries, from food service and retail to hospitals, daycare and financial services.

“With a touch fingerprint reader, no one can steal credentials and you can’t fake out the reader,” Katz says. “You can’t leave your finger at home, and you can’t share it with anyone else. It’s the who-am-I approach versus the what-I-have approach.”

Part of the motivation for companies to switch to biometric time and attendance is to reduce money lost to fraud. “But the other side is it’s less of a burden to management,” Katz says. “If you have to call IT or human resources every time someone forgets a password or loses a card, that translates to dollars and cents.”