Quick, cheap and high-quality all within reach

Despite individual preferences for one print type over the other, Smith contends that there are ways to achieve a similar outcome with both direct-to-card and retransfer printing. Because the technology is basically the same as retransfer from a printing perspective – you can have a 300 dpi resolution on both – in general, the quality can be similar on the two, he adds.

“When people talk, they push retransfer more. But it’s all in the implementation; it’s not in the fundamental technology, even though there are perceptions out there that one may be better than the other,” he says.

Although some promote retransfer as providing a better image quality, Smith says that may not always be the case. “Both types of printers can create high-resolution images, so there’s not one better than the other in terms of image quality,” he says.

At one point, Datacard started printing cards with both retransfer and direct-to-card printers and showed the end result to partners and customers for feedback. Smith says people could not reliably pick out which print type was which. “Depending how well it’s implemented, you can get very good results with direct to card,” he says.

Even with direct to card, the printer can print an image very close to the edge of the card. Smith believes the future of card printing will focus less on printing the image and more on the printer’s other capabilities, such as incorporating protective laminates or security features such as holograms.

Vendors are working to bring more durability and security to cards through printing.

There is a push to make retransfer film sturdier to address markets such as financial cards. “This is a card you’re going to swipe frequently as you’re making your purchases,” says HID’s Meier. “The image will wear after a certain number of swipes, so adding durability makes the card last longer.”

More high-definition print heads are finding their way into the retransfer space, too. Like Evolis with its Avansia line, other manufacturers are exploring printers that can produce 600 dpi images.

Even as new advancements come into play, Talavera contends that there will continue to be a need for both printing technologies. “I don’t think there’s really good or bad,” he concludes. “You need to match the printer to the needs of the end user and what makes sense for their budget.” 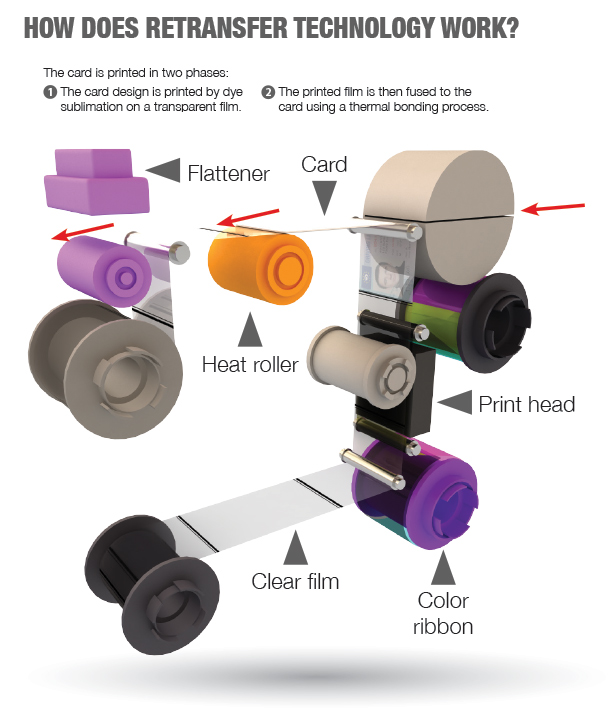 Choosing between reverse image and ...