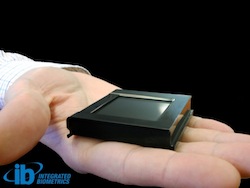 The sensor is made with Integrated’s patented Light Emitting Sensor (LES) technology that’s been incorporated with a thin film transistor. The LES technology functions due to a highly engineered charged polymer film that interacts with the skin’s properties to capture prints. This combination of technology results in a smaller, lighter scanner.

The image capture happens at the FBI’s standard 500PPI requirement, and the system complies with both Appendix F and PIV071006 standards.

Not all are created equal: Contrast...