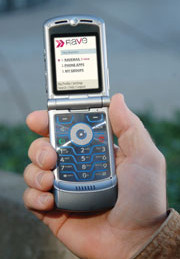 Colleges have other options for cell phone alerts, of course. They could go off campus and hire a company specializing in text messaging. That’s what Rave Wireless and Mobile Campus are offering to universities.

Rave offers what its COO, Raju Rishi, calls “an alert solution, which basically gives the university the ability to get emergency broadcasting to the entire school or a subset of the school (like students who live on campus), whether it’s about a gas leak or orientation. The university pays us for that capability yearly. We tie into Blackboard (campus card solution),” he added, “so we don’t have to recreate the lists.”

He said the plan works with all cell phone carriers, email, and web mail. So if the student doesn’t have a cell phone, he can still receive an email alert.

Rave also offers a full-blown cell phone solution called Rave Campus that is tied to a specific carrier. At Atlanta-based Mercer University, Rave Campus recently announced a tie-in with Sprint. “With this you get additional features like really reduced phone rates and other options,” said Mr. Rishi. And of course, the program includes the emergency text notification feature.

“Rave Alert is designed to work with any cell phone. Rave Campus is designed around a (specific) phone model (and carrier),” he added.

The company currently serves about 25 campuses, about half which use just Rave Alert and the other half Rave Campus. By the end of the year, Mr. Rishi said he expects to have 60 or 70 campuses in one or the other program.

While Rave’s alert feature is nice, said Michael Belote, Mercer’s vice president of information technology, that’s not the reason the Macon, Ga.-based school went with Rave. “Most students are into instant communication instead of email. They’re using MySpace, Facebook and text messaging. We’re just adapting our communications technologies to meet the needs of today’s students.”

In fact, the decision to go with Rave, and its enhanced text messaging features, came in March, about a month before the Virginia Tech shooting.

“There is certainly a safety component of Rave Wireless but we see a lot of value in some of the applications that Rave provides in building the community, enhancing student learning as well as the safety features,” added Mr. Belote.

The phones are free to students and the $32.50 base plan includes unlimited text messaging, free nights and weekend calls and unlimited calling using Mercer’s Mobile Network, explains Mr. Belote. Full deployment is expected to take place this August, in time for fall enrollment.

He said if a student decides to keep his existing phone, he can still sign up with the college to receive emergency or other types of text messaging alerts.

Another option is Mobile Campus, Atlanta, GA. It offers free text messaging to university students in exchange for the students agreeing to receive advertisements a couple times a day.

“The first thing you need is for students to opt in to receive the messages. Probably the most effective means to reach your students is via SMS,” said Mr. Ryan, former head of AT&T’s wireless data services division. “When Virginia Tech happened, people became more interested in SMS as a way to communicate with their student bodies and we got a lot of calls.”

In a perfect world, that would be all that’s needed. But cell phones aren’t perfect. “The challenge is we don’t own the SMS infrastructure,” said Mr. Ryan. “All we can do is place the message out there for delivery. But (carrier) capacity and various other challenges will determine how long it will take to get the message to the individual,” he said.

Text messages delivered around the country shouldn’t be a problem, “but when you’re delivering SMS in a given geography, when you try to send 30,000 messages through one cell site, that’s when you run into capacity (problems),” he added.

That’s why he believes universities should concentrate on delivering “something that’s multi-modal–text messaging and email–so if one fails, the other works,” he said.

While Mobile Campus’ text messaging service can reach “a significant portion of the student body,” says Mr. Ryan, “we don’t have to reach 100% of the students to get the message out. Even if you hit 40%, the rest will know pretty quickly simply by word of mouth.”

He said 14 universities have signed so far with Mobile Campus and “we’re actively seeking to serve another 11. We expect in the fall to have quite a large constituency signed up.”