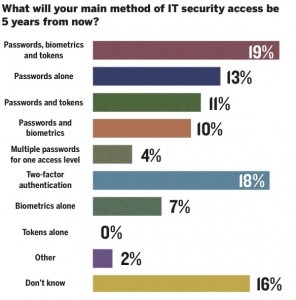 The headlines often roar about the death of the password but the reality is the password isn’t going away anytime soon. What’s likely to happen is that other authentication factors – some more visible than others – will be used in conjunction with password for access to web sites and IT resources, according to a survey from SecureAuth.

Survey results showed that 58% felt confident in their company’s protection from security breaches, yet 39% use password-only authentication measures. Some 30% said they use passwords and token for access. When asked who executives were most concerned would compromise the company’s network, 62% responded that they view employees as their biggest threat.

On the encouraging side, 63% of executives said they have plans to enhance network security from the password-only model. However, for most companies, this process will take at least two years to achieve, leaving them vulnerable for some time to come.

Five years from now those survey report that 62% of employees will be using a combination of password, biometrics, token and other technologies. Thirteen percent reported that they would be using passwords only in five years. Some 16% don’t know what the status of network security will be for their organization.

The survey polled 500 senior-level information technology executives and asked them to answer 10 network security questions with respect to the company each represented.

A copy of the report can be downloaded here.

Survey: Consumers want anything but...

New survey shows over half of retai...