HID Global announced that it is working with Microsoft to make cloud app access as simple as tapping a smart card to a laptop, tablet, smartphone and other NFC-based mobile devices.

HID Global hosted a webinar on mobile user authentication and how the company’s, ActivID Tap Authentication, can benefit users of Office 365 and other cloud-based applications in their daily work. The two companies will host part two of the public webinar series later this year and will build on the foundational meetings with key Microsoft ISVs at Microsoft WPC in Orlando that took place earlier this year.

Some use cases for ActivID Tap Authentication include retailers accessing inventory control and payment systems from the store floor. Enterprise and health care workers who have to login to numerous applications throughout the day can replace complex passwords with a more simple tap-in experience. 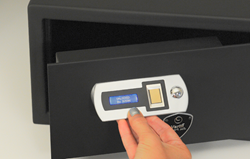 Zvetco Biometrics announced the introduction of the Verifi Smart.Safe line of biometric safes with identity management capabilities. The first in the series, the S6000, is now available for sale on the company web site and on Amazon.com.

The Verifi S6000 is a tabletop sized safe made of solid steel, and enables access at the touch of a finger. The S6000 also has user management capabilities. The owner has full control over creating additional users and corresponding privileges, and can delete selected users without the need to re-enroll everybody else. For accountability and traceability, it logs every usage of the safe, including the user ID and timestamp, and keeps event logs to record when users are added/deleted, fingerprints added, or alarm conditions are triggered.

With TeleSign Smart Verify, developers can:

The LEGIC ID Network has expanded to include reader manufacturer Bodet Software. Bodet has decided to implement LEGIC reader chips into its systems. For more than 20 years, the Bodet Group has been a provider of time & attendance and personnel management solutions for small and medium enterprises.