The ‘411’ on polycarbonate ID cards

Frank Abagnale successfully stole numerous identities and subsequently millions of dollars with a doctored license and a series of fake checks. He was so successful that it merited a feature-length Hollywood movie. Today, hackers are building ever more sophisticated tools for cyber fraud, often combining the use of a weak physical document with information accessed online.

For centuries, paper was the material of choice when it came to producing identity documents. From the 1970s onwards, plastic has gradually taken the place of paper for documentation purposes. But just like we are tackling cyber-fraud, people’s physical ID documents are still the primary form of identification and are one of the weakest links in identity chain. Polycarbonate, a new stronger material, is gradually gaining traction and could represent the next-generation in secure ID documents. But is physical ID document security taking a backseat to cybersecurity?

In addition to laser engraving, polycarbonate cards include other tamper-proof components that can be tactile, seen with the naked eye, or only visible with additional equipment

According to the CyberSecurity Market Report published by Cybersecurity Ventures, worldwide spending on software security to combat identity theft and cybercrimes will exceed $1 trillion over the next five years. Despite this investment, both government agencies and private-sector companies will remain vulnerable to fraud if the physical ID documents are not addressed. More than 15 million people in the United States fall victim to identity fraud each year in some capacity. Much of this fraud is not online, but rather the result of a fake identity cards created using tools in someone’s garage or basement.

Identity protection in today’s world cannot be accomplished with software alone. It requires a holistic approach that adopts both digital and analog solutions for the physical world. Technological advances, like polycarbonate for physical identification cards, are helping prevent identity attacks and are better preparing law enforcement to catch fraudsters. Polycarbonate card bodies for driver licenses, ID documents and even passports are providing a layered security approach to physical documents making them more complex to counterfeit.

So what exactly is polycarbonate? A few distinct features of this material make it uniquely beneficial for physical identification cards. These include:

Arguably, the most important advantage of polycarbonate is the security benefits that the material provides. Because polycarbonate cards are made up of multiple layers of plastic, it is nearly impossible for fraudsters to change the materials or security features without destroying the card completely. This makes the card body much more secure than other available materials.

Beyond laser engraving, polycarbonate cards include other tamper-proof components that can be tactile, seen with the naked eye, or only visible with additional equipment. The level of security features vary but can be easily distinguished by law enforcement or other ID authorities. Once police officers or others are familiar with identifying the security features, verifying the authenticity of an identity document is much easier. 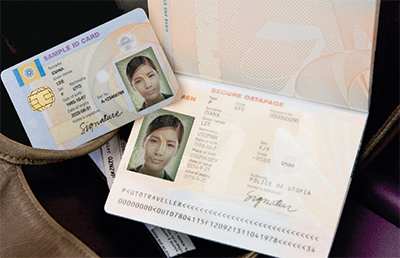 Recent improvements have resulted in a polycarbonate material that can support high-quality color photos. This advancement enables the combination of detailed colored photos with the highest available security technology available for physical identification. For example, deep-set embedding of micro-text in the images on polycarbonate documents make alteration to ID cards nearly impossible.

The actual material itself is another feature that sets polycarbonate apart from other ID materials. A type of thermoplastic technology  –  the same material used to make bulletproof glass  –  polycarbonate boasts excellent molding and thermoforming properties.

Polycarbonate lasts longer than other physical ID materials. Typically, IDs and driver licenses last for about eight years. But testing has shown that polycarbonate cards can last beyond the ten-year mark, giving them a longer life than other materials.

In the U.S., there are more than 211 million driver licenses in circulation. Local government and law enforcement are currently facing the challenge of strengthening the security and integrity of these cards, while also having to issue more cards as the driving population continues to grow.

All of these evolving security techniques make it difficult for fraudsters to keep up. In the U.S., both the federal and state governments are looking to polycarbonate. New York, Maryland and Colorado have already adopted polycarbonate technology for their personal identification cards and driver licenses, with the federal government moving to include a polycarbonate component in the U.S. passport.

Trüb to provide Guinea with ne...