The airport of the future

It’s 7 a.m. at your convention hotel, and you’re packed and ready for your mid-morning flight. You’ve already checked in, so all you need to do before breakfast is to leave your luggage at the hotel’s bag drop station for automatic transport to your airline.

When you arrive at the airport, you immediately receive a welcome notification on your phone, letting you know that your 10:30 a.m. flight is at Gate B37 and that you can proceed to security checkpoint No. 3 for the shortest wait.

As you move through the airport, you receive another notification telling you that your flight is delayed by 30 minutes. The airline then sends a $5 food voucher to your phone for a restaurant in your concourse.

When you finally arrive at the gate, you flash your phone on a reader at the self-boarding station and get on the plane. You pull up your device one last time before takeoff to check the status of your luggage.

This is the airport of the future – where passenger identity consists of far more than a bar code and a flight number, and this new identity can get you where you need to go with much greater efficiency.

Tech leaders predict that in as little as 10 years, airports will employ identification technologies such as biometrics, NFC and Bluetooth-enabled beacons to streamline, personalize and secure the passenger experience in these and many other ways.

“The capabilities that you’ll have as you travel through the airport are limited only by your imagination,” says Jim Peters, chief technology officer of SITA, a global specialist in air transport communications and IT. 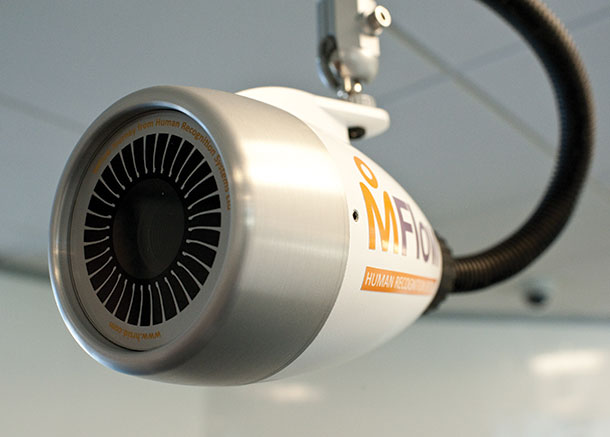 Self-boarding and other automated systems are at the crux of what innovators hope to achieve with the passenger experience in the not-so-distant future.

Jim Slevin, managing director of aviation for Human Recognition Systems in Liverpool, says airline passengers desire greater self-service and automation. It translates to fewer check-in counters and a move to modernizations such as self-service bag drop units. “People don’t want to work with humans,” he says.

Slevin believes that 80% or more of the airport journey will be automated, with only the residual 20% requiring assistance from human agents. Several airports are already experimenting with this automated future.

At the Toulouse-Blagnac Airport a trial is enabling select Air France frequent fliers to use NFC-enabled smart phones as their boarding passes on flights to Paris-Orly Airport. Passengers automatically receive their NFC boarding pass on their smart phones at check-in and can use them all the way through the airport.

With Apple’s recent announcement that it has adopted NFC as a technology for payment on the iPhone 6, Peters suspects it’s only a matter of time before the iPhone can function for other purposes, including boarding.

Wearable technology could also play a more significant role in boarding. SITA has been giving passengers the ability to board their flight by scanning a smartwatch, delivering boarding passes via an app on Android wearables.