The modern plan for digital identity in Australia and beyond

A recent report from Australia Post outlines a forward-thinking plan for a nationwide digital identity initiative. Though the country’s postal service is focused on the specific needs of Australians, the majority of the challenges and ideas are universal. Titled, A frictionless future for identity management: A practical solution for Australia’s digital identity challenge, the document is a great primer on modern approaches to federated digital identity.

Based on survey research conducted with local citizens, the case for digital identity is clear. Australians prove of verify their identities hundreds of millions of time each year for a wide array of in-person, on the phone and online transactions. It is cumbersome, insecure and survey respondents are sick of it. 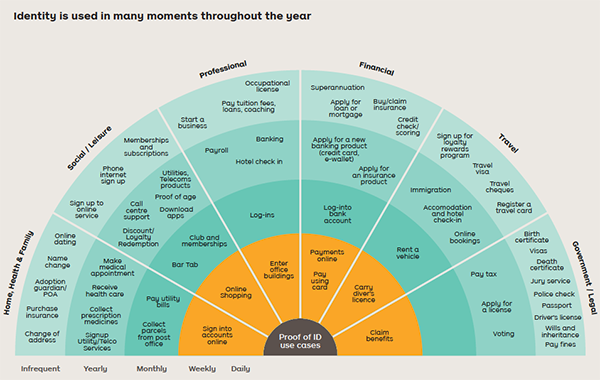 If they could reuse a verified identity held within a mobile device, it would be more secure than a drivers license or peripheral hard documents. It could “unlock up to (AUS) $11 billion in economic value for the Australian economy.”

“Think of all the businesses that don’t exist today that could if it was easier to identify individuals in the digital realm. That’s the exciting world we’re about to enter into,” says Cameron Gough, Australia Post’s General Manager – Digital ID and DDC, Trusted eCommerce Solutions.

Australia Post is proposing a solution that puts the user in control of their identity and attributes. The survey concluded that citizens don’t want to share more info than is necessary to complete the job and they want to control their data and who has access to it.

The following section gives a concise, yet accurate descriptions of the current, modern approach that Western nations around the globe are pursuing for digital identity.

Identity in the digital realm is still a friction-filled experience. We want to make it something that seamlessly happens in the background of all the interactions – both physical and digital.

“What we found through the research is that identity in the digital realm is still a friction-filled experience. We want to make it something that seamlessly happens in the background of all the interactions (both physical and digital) we have,” explains Gough.

A digital identity could potentially be re-used in physical and digital interactions, and will be universally recognised and trusted by others to prove who you are. It’s more secure, because it provides controlled access through biometric authentication. And users will be in control. They could consent, on a transaction-by-transaction basis, to give specific businesses or government agencies access to their identity data. The platform would also be open to third parties to create and innovate their own digital products and services, relying on Australia Post’s ability to provide them with access to highly assured consumer identities.