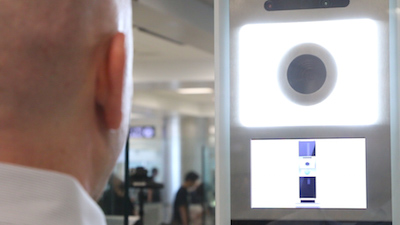 U.S. citizens and some first-time Visa Waiver Program travelers coming into John F. Kennedy International Airport in New York may have their photo automatically checked against the photo stored on their electronic passport using facial recognition.

The new security procedure adds one step to existing processes. When approaching a Customs officer the individual hands over the passport, it’s scanned along with the information stored on the contactless smart card chip, and then the traveler stands in front of a camera and has another photo taken, says Terry Hartmann, vice president of global transportation at Unisys, which is providing the facial recognition technology.

The facial recognition system then gives the probability of a match with the image from the passport and then the officer decides whether additional screening is necessary, Hartmann says. The system will also determine photo quality and whether another picture has to be taken. “The officer makes the decision and refers the traveler to secondary screening if he’s not confident,” Hartmann explains.

The images taken will be deleted unless Customs officials determine that further administrative or enforcement actions are necessary.

At first blush it would seems that the system is just matching a face to a store image, but it’s also verifying the details stored on the ePassport chip, Hartmann says. “It makes it a lot more difficult to counterfeit a passport,” he explains. “You can’t just change the information on the data page but also change the information stored on the chip and make sure that passes the necessary tests.”

The deployment at JFK builds on tests of the technology that were conducted at Washington Dulles Airport last year. Additional systems will be rolled out at Dulles in the next month, Hartmann says.

Facial recognition coming to the fo...