For years we have heard talk of the promise of NFC-enabled consumer products, but at least in the U.S. little has come to market. An exciting new product from high-end appliance manufacturer, Vitamix, however is changing that. Two new models of the company’s popular kitchen blenders – the Ascent and the Venturist — are shipping with embedded NFC capabilities.

Smartrac provided the NFC expertise to the launch, designing an NFC reader for the blender’s base and embedded tags for containers, cups and add-ons.

When a new container is placed on the appliance base, the tag communicates with the base to automatically set up to 140 operational and safety parameters. For example, if a container designed to create hot soups is installed, the heating elements can be engaged and buttons that should not be available, such as ice crush or frozen sorbet settings perhaps, are disabled.

Combined with reed switches controlling the NFC tag antenna and coil, Smartrac’s NFC tags are a key element for a sophisticated wireless interlock system for the new blender models. Reed switches are electrical switches that are actuated by magnetic fields. Controlling those via the NFC tags lets the unit know that the container was properly secured to the base for safer operation. It also ensures that only approved containers are used.

In the near future Vitamix intends to launch, “smartphone apps and all-new functionalities which take our customers’ experience to the next level,” says Dave Kolar, Senior Engineering Manager at Vitamix.

For example, by tapping an NFC-enabled handset or tablet to the unit or a container, it might launch a recipe and automatically establish the proper device settings. It could also facilitate product registration, loyalty or other connected functions. 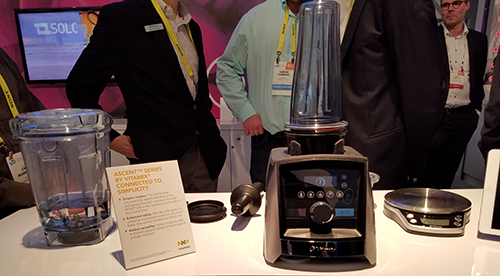 The NFC solution for Vitamix was a technical challenge in that the embedded tag had to interact properly with the reed switches and be molded in the container housings. They would need to survive the molding process as well as years of extreme heat, vibration and potentially thousands of dishwasher cycles. Smartrac’s customized NFC tag built on NXP’s NTAG216 IC met the demands, and the SELF-DETECT™ container housings include both embedded tags and coils.

SecureIDNews asked Art Barton, North American Regional Sales and Business Development Manager, Smartrac, about the project and what it means for NFC in consumer devices.

SecureIDNews: Can you expand on the potential for NFC-enabled consumer products brings when we incorporate use of the handset as well?

Barton: Right now, Vitamix is hard-coding the URL into the tag memory for registration with a smartphone, so that when you tap the tag on the blender container(s) you get the Vitamix registration site. This tag hard-coding of the URL is programmed at the factory using the NFC tag/chip production workstation programming application Smartrac has developed.

The potential is for that URL to become dynamic, via a phone application, so that when the consumer taps the container tag successive times, other URL-prompted screens, such as loyalty program rewards, discount coupons, possibly data which shows the date and place of production (to assure authenticity to the consumer) and other brand-loyalty building offers or information, come up, not just the registration URL.

Also, there is potential for Vitamix to offer commercial users a phone application, which literally changes the performance curve of the appliance, via the blender motor, for specific recipes.

These recipes are now downloaded via EPROMs, which have to be updated periodically. With a restricted phone application, users could program recipes via the phone’s NFC reader directly to the available memory on the NFC tag. In this way, the NFC tag effectively replaces the EPROMs.

A version of this performance/receipt changing application might be offered to consumers in the future as well.

SecureIDNews: For years, we have heard of the great potential for NFC-enabled consumer products, but have not seen many rollouts in the U.S. What does this announcement mean for future of NFC in connected devices?

Barton: I think there are two applications classes that the Vitamix example could help popularize. The first is to show by example that you can authenticate and prevent counterfeiting of any “razor blade“ when it attaches to any “razor.” By razor blade, I mean any cartridge, container, etc., that is required to complete a product when attached to a holder or appliance. This might be a filter, cartridge, container or bottle.

At CES we registered high interest coming from large global food and beverage manufacturers who grasped this potential.

The second potential application class is to specify performance levels for an electrical/mechanical appliance via identification of the specific container/cartridge/filter type. As Vitamix has shown, these parameters are tailored to the identity and characteristics of that container or refill. Obviously this is a higher-level benefit than just authentication/anti-counterfeiting, and so the application ROI is higher for situations where attachment determined performance tailoring can be achieved.