“I got involved in the very beginning when biometrics and facial recognition were very far from a household term, when we did not have fingerprint readers on our phones and we did not imagine using our face to conduct a transaction,” says Frances Zelazny, vice president of cybersecurity company BioCatch and an honoree of the 2017 Women In Biometrics Awards.

Zelazny’s first job in the biometrics industry was head of marketing for facial recognition company Visionics, which later became L-1 Identity Solutions and was sold to Morpho in 2011.

“Here was an opportunity to apply a technology into social and economic development programs, into preventing people from stealing identities and to enabling new ways of doing commerce,” Zelazny says. “The company was led by one of the pioneers in facial recognition, Dr. Joseph Atick.”

Her time at Visionics included what she calls “watershed moments” for the industry, the biggest being the 9/11 terrorist attacks. “It caused us to really consider the impact that this technology could have on our society from a security standpoint, from a privacy standpoint,” Zelazny says. 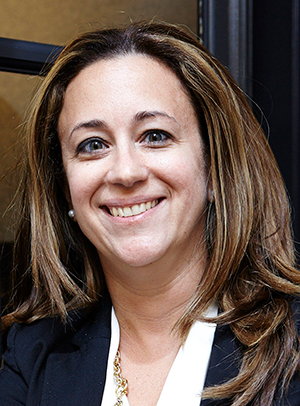 “I think one of the most important things that we did early on – and I want to give Dr. Atick credit for this – is to really ensure that the industry had responsible use guidelines and really understood the sensitivity of using biometric technology in the real world.

Another important effort was really to make the world understand the link between identity and social and economic development. We see biometrics today driving many national I.D. programs, voter registration programs.

Really, because of biometrics, we’re able to address and have a solution for some of the massive cyber threats that we’re seeing today.”

From an early age, Zelazny had an understanding of the importance of identity. Her father and his family stayed on the run to survive the Holocaust.

“I think that mentality drives a certain thinking around identity – who you are, where you came from,” Zelazny says. She learned more about the importance of identity during a college internship at the United Nations. “When you see where the underlying challenge comes from – oftentimes it is the lack of identity – it really starts to open your eyes.”

Zelazny is among five winners being recognized by the Women in Biometrics Awards program in New York City on November 15th. The awards are presented by the Security Industry Association and SecureIDNews, with sponsorships from IDEMIA and PSA Security.