“Law enforcement caught me at a young age,” says Kimberly Del Greco. “I care about keeping the country safe and contributing to that. I enjoy working in the public sector, being a public servant.” 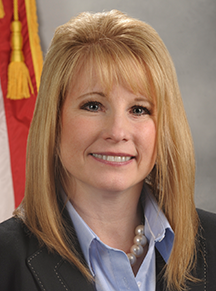 Del Greco is Deputy Assistant Director of the Information Services Branch in the FBI’s Criminal Justice Information Services (CJIS) Division. Her duty with the FBI began more than 22 years ago and brought swift exposure to biometrics, specifically fingerprints and latent technology. In 2003, she was promoted to Chief of the Biometrics Services Section.

“I worked on establishing the requirements for an upgrade to our fingerprint identification system – the Next Generation Identification System – and it really was to replace our outdated fingerprint algorithm that we had for decades at the FBI,” Del Greco says. “We delivered a palm print technology, which is the first time ever the FBI had palm prints in their system. We delivered a new upgrade to the fingerprint algorithm. We also provided access to search our mugshot photos, something we had not done before.”

I am most proud of the work that we did with the Next Generation Identification. I was the business line manager for that … we worked very closely with the law enforcement community collecting requirements. It was a big lift for the FBI

In 2006, Del Greco created the Biometric Center of Excellence, a research arm for the FBI. “It allowed us to explore voice technology, iris technology, face technology, scars, marks, and tattoos,” Del Greco says. “Then, we also worked on Rapid DNA. It’s been very beneficial – especially in the facial and the DNA field of technology – helping the FBI provide that leadership across the nation.”

“I think the one thing that I am most proud of is the work that we did with the Next Generation Identification. I was the business line manager … we worked very closely with the law enforcement community collecting requirements. We tried to expand our utility of the technology to bring services to the end user – and that included the palm prints and included enhanced latent technology. The fingerprint algorithm allowed us to become way more efficient in our hit rate and quality. And then, of course, the facial searches of the mugshots – I feel like that has allowed us then to be incremental from here on out and keep upgrading the system, but that was a big lift for the FBI.”

Del Greco names as her most significant contribution the collaboration she forged with other government agencies and the intelligence community to share records, including fingerprints. “That was probably the most significant, getting all of the agencies to coordinate, collaborate and share our biometrics together,” she says. “From there, we were able to upgrade our system and share more critical records.”

Del Greco will be recognized this month by the Women in Biometrics Awards program alongside four other honorees. The awards are presented by the Security Industry Association and SecureIDNews during the SIA Honors Night ceremony, with key sponsorships from IDEMIA and PSA Security.