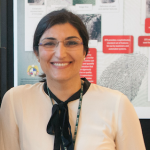 “Garbage in, garbage out,” is an old adage used to talk about biometric image quality and how if you start with a poor quality image you’re not going to get a quality match in return.

Elham Tabassi, an electrical engineer at the National Institute of Standards and Technology, knows this phrase well as she broke ground on the creation of systems that evaluate the quality of fingerprint images before are matched.

Her proudest accomplishment may be the NIST Fingerprint Image Quality (NFIQ) algorithm, an open source software solution that assigns a quality value to a fingerprint image and thereby allows enrollment operators to reject poor prints and system owners to monitor quality levels across their enterprise. In collaboration with industry and governmental organizations, Tabassi recently completed version 2.0 of the NFIQ software, which promises faster and more accurate quality assessment.

Tabassi has a bachelor’s degree in signal processing and master’s degree in electrical engineering. She began working with facial recognition systems at NIST around 2001, she says. In 2002 when Homeland Security was launching US-VISIT – now the Office of Biometrics and Identity Management – they wanted to measure biometric sample quality for fingerprints. “The text book method of image quality was measured by sharpness,” she explains. “You can have a sharp image, but if there’s not enough data there it’s worthless.”

She decided to look at the quality of the information present in a fingerprint image and build on that instead, Tabassi says. Out of that came the NFIQ, which tells an operator at the time of capture if the image is of sufficient quality.

Tabassi worked on a similar image quality system for iris biometrics and is now working on one for latent fingerprints in the forensic world, she says.

She is active in the standards world, participating in the ISO/IEC JTC 1 Subcommittee 37’s Working Group 3 on Biometric Data Interchange Formats, serving as editor of four international standards, and successfully advocating for quantitative evidence-based development as the cornerstone of the biometric standards making process.

This is the second annual Women in Biometric awards. The eight finalists – with four winners — are bring profiled in the coming week and the winners will be presented on Wednesday, Nov. 16 during the Security Industry Association’s “Honors Night: Celebrating Performance, Partnerships and People in the Security Industry,” held in conjunction with the ISC East event. Women in Biometrics Award winners will be honored at the event along with other distinguished security industry award recipients.