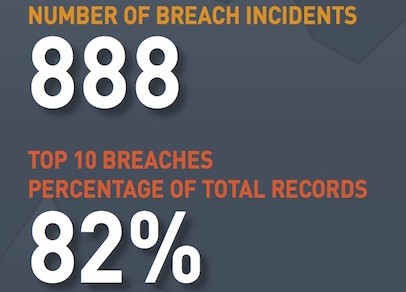 Breaches up but total lost records down 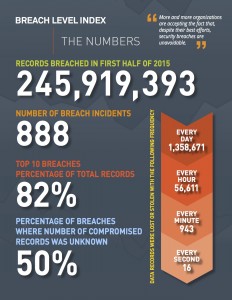 The number of breaches was flat compared with the last six months of 2014 that saw 892 breaches but increased by 10% compared to the 803 data breaches in first half of 2014.

But while the total breaches increased the number of records stolen in those incidents declined by 40% from the 414.8 million records breached in the first half of 2014. There was an even greater drop — 61% — in the number of breached records compared with the second half of 2014, which saw 626.4 million records exposed. There is a caveat with these numbers, for nearly 50% of the reported first half 2015 data breaches; the number of data records compromised is not known.

While the number of breached records may be down for the year, the year has been notables because of the size of some of the breaches. The Anthem Insurance breach was the largest with 78.8 million records stolen followed by the U.S. Office of Personnel Management hack of 21 million records.

Health card organization were the hardest hit so far in 2015 with 187 breaches, followed by financial services and then government.

In order to help stop breaches there are three steps enterprises should take:

By implementing each of these three steps into your IT infrastructure, companies can effectively prepare for a breach and avoid falling victim to one, the report states.

Survey: IT execs focused on perimet...

Iris scans could save billions on m...