2018 Women in Biometrics Award winner Lisa MacDonald serves as Director of Identity Capabilities Management Division, DHS Office of Biometric Identity Management (OBIM). But MacDonald didn’t know how to spell biometrics when she stumbled into the industry.

“I was an English major; I have a Master’s in Public Administration,” MacDonald says. “I did come to biometrics in a pretty roundabout way.” 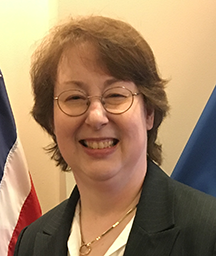 After graduation, she began a 12 year stint as a consultant with technology firm Booz Allen Hamilton. “It gave me experience helping clients solve real world, big ticket problems in strategy, process, and performance,” MacDonald says. “It helped me really learn how to take ownership of creating solutions, driving them through to completion.”

She helped the Department of Defense Biometrics Task Force (BTF) develop the first DOD biometrics enterprise strategic plan. Her interest was bolstered by the September 11, 2001 attacks. “At Booz Allen, we lost three colleagues in the attack on the Pentagon,” MacDonald says. “That has always stuck with me, and that made getting to work in biometrics all that much more meaningful for me because here was a technology and a function that could help identify known or suspected bad guys.”

What I’m really most proud of is being part of the organizations – first at DOD and now at DHS – that deliver biometric services that make a real difference all day, every day supporting national security and public safety.

MacDonald has been with the DHS Office of Biometric Identity Management (OBIM) since 2012. For the last year, she has directed OBIM’s Identity Capabilities Management Division. She says, “I oversee a division that has purview over strategy, policy, privacy requirements, big acquisition, enterprise information management, and a number of other functions.”

“What I’m really most proud of is being part of the organizations – first at DOD and now at DHS – that deliver biometric services that make a real difference all day, every day supporting national security and public safety. I really feel lucky to be part of that.”

Her career highlights include leading a successful campaign to garner a $200-million replacement biometric system for DHS – the Homeland Advanced Recognition Technology (HART) system – and crafting strategic planning and implementation processes for DHS and BIMA.

MacDonald advises industry newbies to keep taking in information. “This capability is only going to continue to grow,” MacDonald says. “The technology is the enabler that allows something to happen. But learn about why we need it … and how it fits into a bigger framework of what’s right. How can we use this amazing capability that’s biometrics – how can we use this in a responsible way that’s good for people, that also helps protect us?”

MacDonald and four other winners will be honored with the Women in Biometrics Awards on November 14th in New York City. The Security Industry Association will join SecureIDNews to present the awards during one of the security industry’s most prestigious events, SIA Honors Night.