Dr. Nicole Spaun began her career staring at planets. “I got my PhD in geology, looking specifically at planetary geology. During graduate school, I worked with NASA’s Galileo mission to Jupiter and its moons,” Spaun says. “About two months before I defended my dissertation – about a month after 9/11 – someone who’d gone to the same university and had the same degree came and discussed biometrics and facial recognition, and how our degrees could be used for comparing people, clothing, vehicles, etcetera in images.” 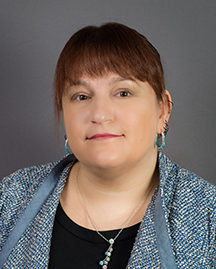 The visitor was Dr. Richard Vorder Bruegge from the FBI, and his urging is what started Spaun down the path that led her to a 2019 Women in Biometrics award.

Her biometrics work began in 2003 as a forensic image examiner at the FBI. She developed the bureau’s first facial identification and comparison course.

In 2010, she became the biometrics program manager for military intelligence at the US Army Europe headquarters in Germany. When her tour ended in 2014, Spaun went to work at the Aberdeen Proving Grounds in Maryland, supporting biometric work as a systems engineer for MITRE Corporation.

I had gotten involved from 9/11 where we had video of the terrorists going through airports … can we prevent this again?’ Part of that was actually just working on casework, helping with terrorism, helping with crimes. It was just something I’m absolutely thrilled to have been able to do and help out.

Spaun’s proudest accomplishment:
“Working on active case work with the FBI and getting them ready to utilize facial recognition for active casework. Just the force multiplier of being able to use a recognition system to search a database, it’s just a phenomenal advancement… To prepare for the facial recognition and to work on active case work – to know what needs to be the policies and procedures in place – that was just really something that meant a lot to me. I had gotten involved from 9/11 where we had video of the terrorists going through airports, you know, trying to get to ‘can we prevent this again?’ Part of that was actually just working on casework, helping with terrorism, helping with crimes. It was just something I’m absolutely thrilled to have been able to do and help out.”

Spaun trained a team from Criminal Justice Information Systems (CJIS) to teach the facial comparison course to agencies worldwide. She was elected as the first chair of the training subcommittee for the Facial Identification Scientific Working Group (FISWG).

She’ll be honored with three other Women in Biometrics award winners this week at the SIA GovSummit in Washington, DC. The awards were co-founded by the Security Industry Association (SIA) and SecureIDNews.