Newly out of college, Jeni Best was working for a Texas probation department when a co-worker needed some moral support.
“My office mate made me go take the immigration test with him because he didn’t want to go by himself,” Best says, “and I, within six months, was offered a position with the INS (US Immigration and Naturalization Service) which later became CBP (US Customs and Border Protection), and it just sort of fell into my lap.” 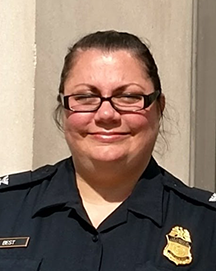 Best began her career focusing on criminal justice and police sciences. Now, she has over 20 years of experience with issues related to immigration, travel and tourism, business transformation initiatives, and biometrics. That’s why Best was chosen as a 2020 Women in Biometrics award winner.

Biometrics really ties into these efforts that look to streamlining the travel process, but also creating a more secure environment in the travel industry

“I’ve been involved with business transformation initiatives that include forms automation, kiosks, mobile devices, mobile applications that have a big impact on the travel and tourism industry,” Best says. “It sort of just evolved into the use of biometrics because it really ties into these efforts that look to streamlining the travel process, but also creating a more secure environment in the travel industry.”

Last year, Best was Acting Director of Biometric Air Exit Operations at CBP’s Entry/Exit Operations Office. She continues to serve as Branch Chief for CBP field operations
.
Best’s career at CBP has taken her to Toronto, Houston, and Washington, DC. She spent time at a port in Calexico, California that piloted an AFIS machine for electronic fingerprint collection. “The machine was the size of an arcade game basically. It was huge, but the capabilities it provided to us in the field were a game changer,” Best says. “I have seen biometrics evolve ever since then throughout my career because I’ve always been a part of it – whether it’s fingerprints, photos, and then biographic information as well.”