At immigration, passengers present an electronic passport, then their finger at the e-gate. The fingerprint is matched against the biometric data stored in the document. While the identity of the traveler is verified at the e-gate, Border Protection Officers can keep monitoring the information in real-time in order to allow border crossing and be onsite to sort through any issues.

This spring, passengers at Paris’ two major airports will start passing through new, faster e-gates with the use of only a passport and a fingerprint

The demand for biometrics in air travel is growing in the United States, as well. U.S. Customs and Border Protection has announced that it plans to use facial recognition as the primary biometric for its U.S. Exit program to combat visa overstays. The program will use facial recognition to validate as foreign nationals leave the U.S.

Other biometrics could eventually come into play for the exit plan, Pattinson says. That includes fingerprints – given that all international travelers are fingerprinted upon entering the U.S. – iris scans and voice recognition are other potential modalities.

Biometrics can also help combat intrusion detection. For example, a traveler gives a boarding pass to someone else at the gate and asks that person to fly in his or her place. When that person gets to the boarding gate, the system will know that the person asking to board the plane is not the same person who was issued the boarding pass.

An airport could, for the first time, match a person’s check-in biometric against the person who boarded. For example, London’s Heathrow Airport recently started using passports for boarding because the airport can validate the travel document against the traveler’s biometrics. There is a camera at the gate, and as the traveler walks in, the system can determine whether that image matches the same biometric captured when the person first checked in.

One of the biggest benefits of incorporating biometrics into airline travel is that it releases the employees’ burden of having to identify people. Those employees include those who work for the airline, airport employees and TSA agents.

“If you actually match it to a biometric algorithm that has created a template of your face from an image, that’s going to be more secure and accurate than if a human did it,” Pattinson says. “So adding in these elements not only increases the speed and efficiency of getting through the airport to your gate, but it also increases the security.”

Improving the customer experience with biometrics in airports

There are non-security benefits of biometrics, too. Not having to wait in line would give travelers more free time to spend in airport retail stores and leisure facilities.

Biometrics could also enable faster recognition of travelers in some of these settings. For example, a traveler could walk into an airline lounge without having to present a boarding pass or ID. By matching the person’s face to the facial image that the traveler provided at check in, the lounge would know that the traveler is qualified to be there, either by ticket type or frequent flyer status, and could even provide the traveler’s favorite drink without taking an order. 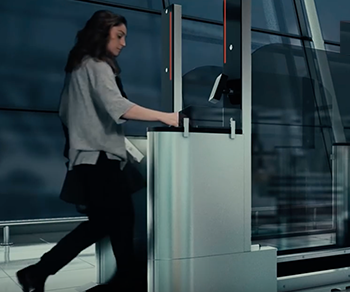 “That level of customer service can be incorporated by the use of biometrics and is a value add in a customer-service driven industry,” Pattinson says.

Biometrics could allow travelers to more easily make purchases once they board the plane. By matching the traveler’s biometric facial template to a passenger name record, a flight attendant would be able to access the traveler’s credit card information.

“Any time when you have to give information again and again and again, biometrics can help that because it becomes a single token of identification,” Pattinson says.