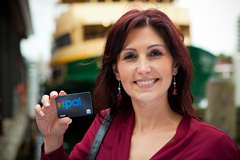 The Opal system, installed by the Cubic-led Pearl Consortium, is being rolled out across ferries, trains, buses and light rail in the greater Sydney area. By 2015 the contactless-based ticketing system will cover 42 ferry wharves, more than 300 train stations and more than 5,000 buses and light rail systems.

Figures released by the New South Wales Transport show that commuters have made more than 100,000 trips using the new adult Opal card to date. Also, the Opal website, which was launched at the beginning of June this year, has recorded approximately 100,000 visits.

Commuters are also enthusiastically embracing the new technology available, with 90% of customers registering for a card online instead of by phone, and more than 70% opting for the auto top-up function.

Sydney commuters first began using the Opal card in December 2012, when commuter trials started on the short Neutral Bay ferry run. Earlier this year the trials were extended to include the Manly ferry service, which accounts for approximately 40% of the 15 million passengers carried on the entire Sydney ferry fleet each year.

A major spike in the number of cards in circulation occurred last month, when trials began on the rail system, on the City Circle and stations to Bondi Junction. The trains are the backbone of Sydney’s public transport network, carrying about 1.5 million passengers a day, and more than 304 million a year.